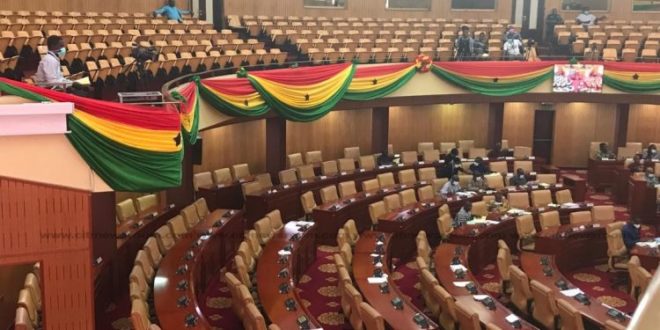 The Minority staged a walkout in Parliament during the consideration of the controversial Electronic Transfer Levy (E-levy) at the second reading stage on Tuesday, March 29, 2022.

The second reading of the levy saw the bill being adopted at the reduced rate of 1.5% from the initial proposed rate of 1.75%.

The bill is currently under consideration by a Majority house, following the Minority’s boycott.

Members of the Majority are also deliberating on some proposed amendments to the bill which have been introduced by the government.

The e-levy is a new tax measure introduced by the government in the 2022 Budget on basic transactions related to digital payments and electronic platform transactions.

Critics of the proposal, including the Minority have warned that the new levy will negatively impact the Fintech space, as well as hurt low-income persons.

The government has, however, argued the levy would widen the tax net as it could raise an extra GH¢6.9 billion in 2022.

A former deputy minister of communications, Mr Felix Kwakye Ofosu, has wondered if the governing New Patriotic Party (NPP), in its attempt to pass the e-levy, would haul one of its MPs, Mr Ebenezer Kojo Kum, who has been bedridden for some time now, to the floor of parliament, to vote on the bill.

The Ahanta West MP, who is also the Minister of Chieftaincy and Religious Affairs, was rumoured dead a few weeks ago, prompting a rebuttal from his family.

I'm Adwenpa-Hene |Blogger & Broadcaster Journalist. I am the CEO and manager of this noble website. I publish on Entertainment, Sports, Politics, Lifestyle, and Technology. You can also follow Us on : YouTube Channel - My Ghana Media TV, Facebook - MyghanaMedia TV , Twitter - @MyGhanamedia2 & Instagram - My Ghana Media TV. Email Address: [email protected] Contact Us: 0200818719
@@MyGhanamedia2
Previous Sachet Water Prices To Hit ¢8 Per Bag From April 1
Next Video: Gravely Ill Chieftaincy Minister, Kojo Kum Ferried To Parliament In An Ambulance To Assist In passing Of E-Levy