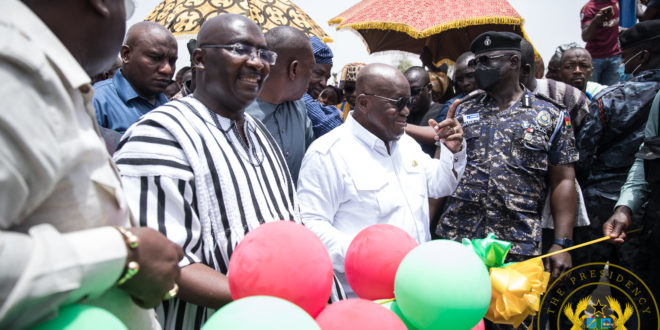 President Nana Akufo-Addo, on Tuesday commissioned the Tamale Interchange, the fourth interchange built by government since 2017.

The interchange forms part of the Government of Ghana – SinoHydro Master Project Support Agreement (MPSA) which was launched nearly three years ago, by the President.

The Tamale Interchange is the first in the northern sector of the country.

Commissioning the project, President expressed delight over the fact that the interchange was completed ahead of schedule.

“I am delighted to be back again, this time, on my birthday, to commission the Tamale Interchange, which has been completed three months ahead of schedule and on budget, in the midst of a global pandemic which has brought considerable disruption to every phase of national life,” President Akufo-Addo said

He added that, “the Tamale Interchange is the fourth interchange constructed since I came into office, following the completion of the Tema Motorway Phase 1 Interchange, Obetsebi Lamptey Phase1 Interchange and the 4-tier Pokuase Interchange”.

Constructed by M/S Sinohydro, the Tamale Interchange has provided prime urban space under the Interchange, which, the President said, has to be put to good use for the benefit of the country.

President Akufo-Addo told the gathering, including the Vice President, Alhaji Dr. Mahamudu Bawumia, and Ya-Naa Mahama Abukari II, that under the Sinohydro project, Government signed a Master Project Support Agreement (MPSA) with Sinohydro for the delivery of US$2 billion worth of priority infrastructure projects across the country, in exchange for the delivery of Ghanaian manufactured aluminium products to Sinohydro.

“This has led, inter alia, to the establishment of the Ghana Integrated Aluminium Development Corporation (GIADEC), a statutory public corporation, to oversee the development of the exploitation of the full value chain of our bauxite resources, so we can have a vibrant aluminium industry in Ghana, and ensure that we live up to our end of the barter transaction. This innovative arrangement, the first of its kind on the continent, is not going to add to our country’s debt stock,” the President said.

This Interchange, according to him, is a good example of the excellent relations that the Republic of Ghana enjoys with the People’s Republic of China.

“May these relations long endure, and I thank the President of the People’s Republic of China, Xi Jinping, for his birthday wishes. I would respectfully ask the Chinese Ambassador to inform the President that I have received his message with happiness,” he added.

Under Phase One of the Sinohydro Project, a total of four hundred and 441 kilometres of roads and two interchanges are to be constructed, for which Vice President, Mahamudu Bawumia commissioned the Lot 8 projects under the Sino Hydro Project, which involved the upgrading of 68 kilometres of selected feeder roads in the Ashanti and Western Regions, last Friday, 25 March.

He said apart from the construction of the Interchanges, government has undertaken critical road projects to improve urban mobility across the country, which will reduce travel times on our highways.

“These include; the construction of some 1,200 kilometres of asphalt overlay works in my first term of office. Beneficiary cities include Accra, Kumasi, Tema, Cape Coast, Sekondi-Takoradi and Hohoe.

As part of the critical roads project, some selected roads in Tamale, Yendi, Walewale, Gambaga, Nalerigu and Damongo have been asphalted,” the President said.

He added that the Ministry of Roads and Highways has programmed to complete 1,500 kilometres of asphalt overlay works between 2021 and 2024.

He stated that the remaining projects are; the reconstruction of the Tamale to Walewale Road Phase 1, which will improve the section between Savelugu and Walewale and assured that work will commence in the second quarter of this year.

“The section between Tamale and Savelugu shall be widened into a dual carriageway; commencement of the dualisation of the Sekondi/Adiembra Roads in Sekondi-Takoradi in the second quarter of 2022; rehabilitation of Agona Junction-Tarkwa Highway; and rehabilitation of Assin Foso-Assin Praso Highway,” the President revealed.

I'm Adwenpa-Hene |Blogger & Broadcaster Journalist. I am the CEO and manager of this noble website. I publish on Entertainment, Sports, Politics, Lifestyle, and Technology. You can also follow Us on : YouTube Channel - My Ghana Media TV, Facebook - MyghanaMedia TV , Twitter - @MyGhanamedia2 & Instagram - My Ghana Media TV. Email Address: [email protected] Contact Us: 0200818719
@@MyGhanamedia2
Previous Video: See The Goal That Sent Ghana To The 2022 FIFA World Cup In Qatar
Next Video: ‘You’re Not Going Back To Dortmund, We Will Kidnap You’ – President Akudo Addo Tells Otto Addo