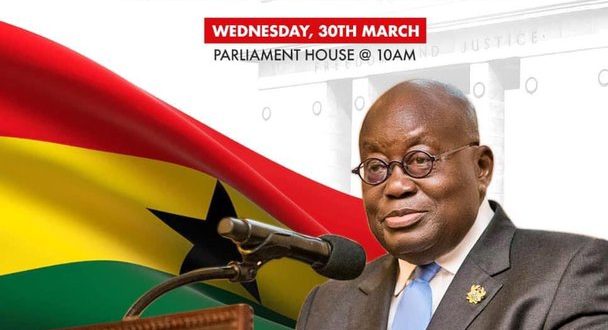 The President of Ghana H.E Nana Akufo-Addo will today deliver an address on the state of the nation to Parliament, a day after the Electronic Transaction Levy (E-Levy) was passed.

The event is expected to be held in the Chamber of Parliament at 10 am.

This sessional Address, which is pursuant to Article 67 of the 1992 Constitution, was postponed because the President was unable to deliver it on March 3.

The Address will help set out the government’s policy objectives and deliverables for the year ahead.

President Akufo-Addo will also get the opportunity to highlight the achievements of his government, the challenges faced, and outline developmental measures for the next financial year.

Mr Akufo-Addo received backlash from members of the Minority Caucus over the delay in presenting the crucial Address.

They claimed that missing the March 3 schedule stalled stakeholder engagements on some key bills, including the Proper Human Sexual Rights and Ghanaian Family Values Bill.

The Majority Chief Whip, Frank Annoh-Dompreh, announced in Parliament on Friday that a motion will be moved on Thursday, March 31, to thank the President for the State of the Nation Address.

He added that a time would be allotted to members to make contributions, eight from each side of the House.

The debate on the Address is expected to be concluded on Saturday, April 2.