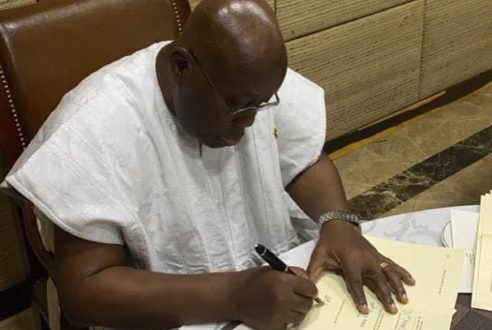 Sources close to the Presidency, have revealed that President Akufo-Addo has signed the E-levy Bill into law.

Speaking exclusively to JoyNews, Minister for Information, Kojo Oppong Nkrumah, confirmed that, the President gave his assent on Thursday, March 31, 2022.

As a result, the Bill, which was passed by Parliament on Tuesday, has now become a binding law which will be operationalised as a revenue measure across the country.

Background to the Presidential assent

This decision was reached after the Consideration Stage was completed by a Majority-sided House on Tuesday, March 29, 2022.

It was considered under a certificate of urgency.

The Bill was adopted at a reduced rate of 1.5% from the initial 1.75% amid a Minority walkout.

The tax, which has become a subject of debate among Ghanaians is expected to rake in close to ¢6 billion in tax revenue for the country.

The Ghana Revenue Authority (GRA) has already hinted that its structures have been revised and ready to ensure mobilization of the income.

The Finance Minister was in Parliament to push for the Bill’s passage a day to President Akufo-Addo’s State of The Nation Address.

From the onset, the Minority had accused the Majority Caucus of smuggling into the Order Paper the consideration of the controversial Electronic Transaction Levy (E-levy).

According to the Tamale South MP, E-levy was not enlisted in Parliament’s business statement for this week.

He questioned why the Majority will pull such a surprise on the opposition National Democratic Congress (NDC) legislators.

According to her, Ghanaians have already accepted the tax revenue measure and expect its passage.

This, she stated, will help address domestic challenges derailing growth of the local economy, a development which has led to a high cost of living in the country.

But after a 30-minute break, the Minority Leader announced that his side will have nothing to do with the Bill.

He maintained that the outcome will bring untold hardship to the populace. On that note, he led the NDC MPs to vacate the chamber.

After this development, the House, despite the Minority’s absence embarked on a speedy consideration and amendment of a few changes in the bill following which the motion was moved to accept it.

In a voice vote, the Minority sided Parliament admitted the E-Levy Bill.