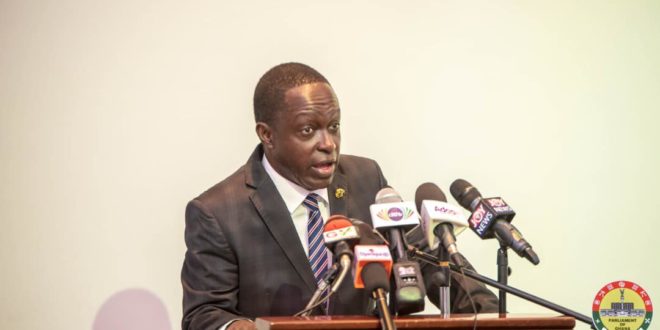 The Member of Parliament for Banda Constituency who doubles as Deputy Minority Chief Whip, Hon. Ahmed Ibrahim stated that the clerk in parliament, Mr. Cyril Kwabena Oteng Nsiah has been sacked from parliament ten years before.

According to him, the clerk doesn’t know his duty in the parliament which is why he was sacked for ten years but fortunate for him he won the case in court and was called to come back to parliament.

He stated that the clerk is been manipulated by the Majority Leader in parliament, Hon. Osei Kyei Mensah Bonsu.

He added that it really hurts when a clerk supports one side of the house.

He added that the State Of The Nation’s Address read by the president, Nana Akufo Addo was full of things he wants to put in place but not what his government has done.

He further added that President Nana Akufo Addo did not mention the high rate of depth of the country and that of unemployment in the country.

He made this statement in an interview with Kwame Nkrumah Tikese , host of the Ade Akye Abia morning show on Okay FM

See also  "I will resume work on the 3rd March Not January 11", Says Daniel Domelevo

please listen to the audio below:

I'm Adwenpa-Hene |Blogger & Broadcaster Journalist. I am the CEO and manager of this noble website. I publish on Entertainment, Sports, Politics, Lifestyle, and Technology. You can also follow Us on : YouTube Channel - My Ghana Media TV, Facebook - MyghanaMedia TV , Twitter - @MyGhanamedia2 & Instagram - My Ghana Media TV. Email Address: [email protected] Contact Us: 0200818719
@@MyGhanamedia2
Previous Sachet Water To Sell At ¢0.40, A Bag Goes For ¢8 From today
Next Robert Sarfo-Mensah Congratulates The Senior National Team