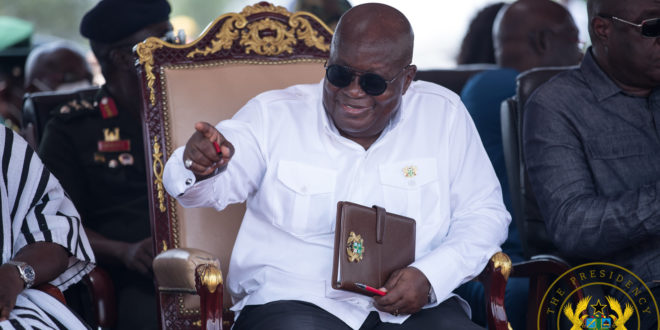 Claim: Akufo-Addo government has constructed some 10,875 kilometers of new roads in the last five years

Verdict: False. The government has constructed just about 5,000 kilometers of new roads since 2017.

President Nana Addo Dankwa Akufo-Addo while delivering the 2022 State of the Nation Address on Wednesday, March 30, 2022, said his government has delivered the most kilometers of new roads compared to all other governments in the fourth republic. He further described it as “unprecedented.”

“Some ten thousand, eight hundred and seventy-five (10,875) kilometres of new roads have been constructed in these five (5) years. Let me mention that yesterday, it was my honour and great pleasure to have commissioned the Tamale Interchange, the first such interchange in the northern sector of our country, which the people of Tamale celebrated. I considered it to be a most satisfying birthday present,” he said.

But his claim has been challenged widely by some political opponents.

The Ranking Member on the Transport Committee of Parliament, Governs Kwame Agbodza said the claim was false and also claimed that the government can only boast of 68 kilometers of new roads constructed.

“The only thing that you claim has been done is 68.5km and the asphaltic overlays that are ongoing can easily be 1,500 km,” he said.

Several media houses including Starr FM and Joy FM have amplified the president’s claim, which continues to generate controversy.

There is no centralized national database that details the progress of road constructions across the country, covering the tenures of all presidents in the fourth republic.

The Ministry of Roads and Highways, the agency responsible for monitoring and evaluating road infrastructure and financing, construction and maintenance activities in the sector, has provided a series of reports that highlight its work in the sector since the Akufo-Addo government assumed office in 2017.

The ministry, in a report on its website highlighting developments in the roads sector between January 2017 and February 2022, indicated that the total length of new road constructions, asphaltic overlays, reconstructions, and all other road development projects were 4,263.37 kilometers.

Source: Ministry of Roads and Highways

The date above clearly contradicts the claim made by President Akufo-Addo during the delivery of the 2022 State of the Nation Address.

Further checks were done on the Ministry of Finance’s website. Its Medium Term Expenditure Framework (MTEF) documents between 2016 and 2021 confirm that at the start of the Akufo-Addo administration, the total length of Ghana’s roads was 78,401 kilometers.

The Roads Ministry in a statement to justify Preisdent Akufo-Addo’s claim, said “any activity on a road amounts to construction.” 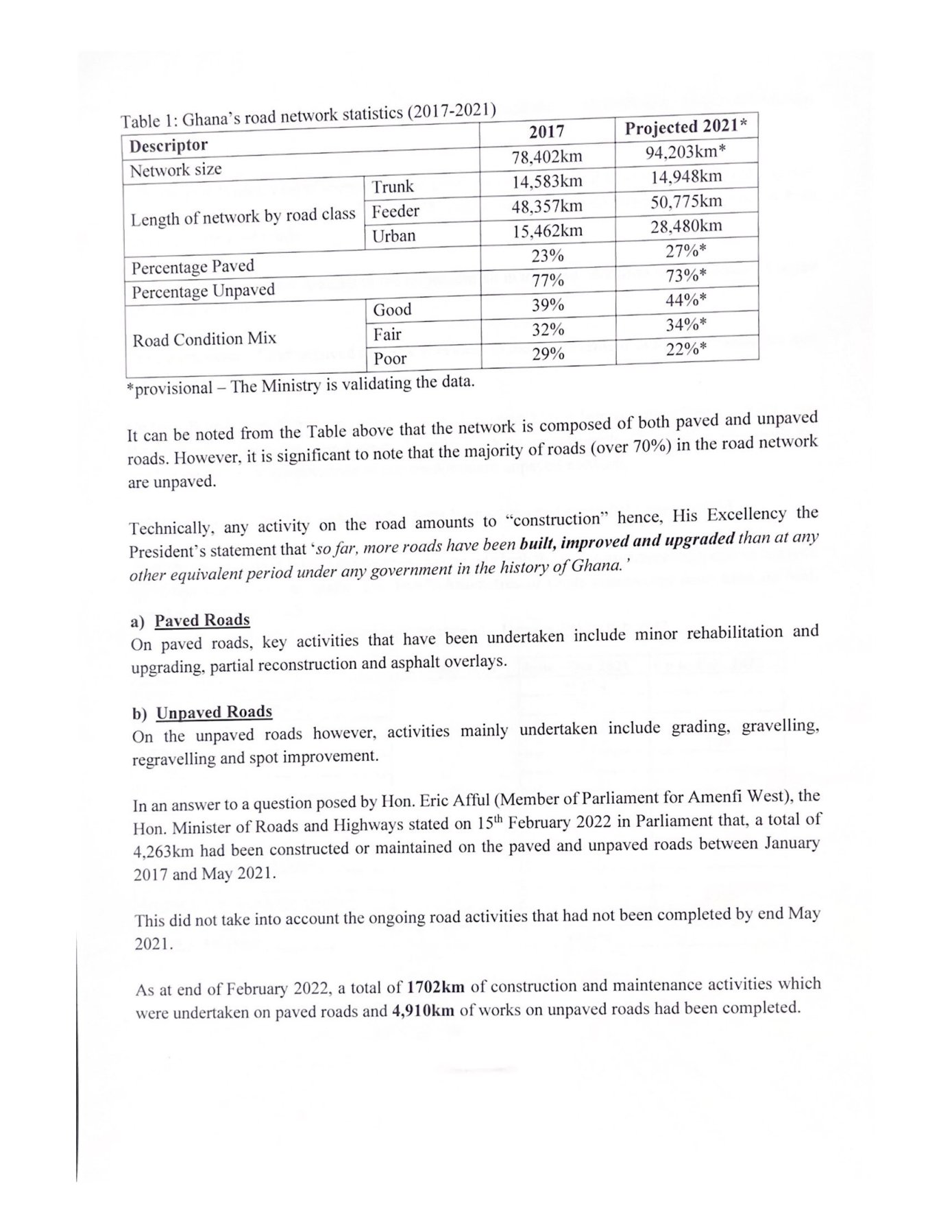 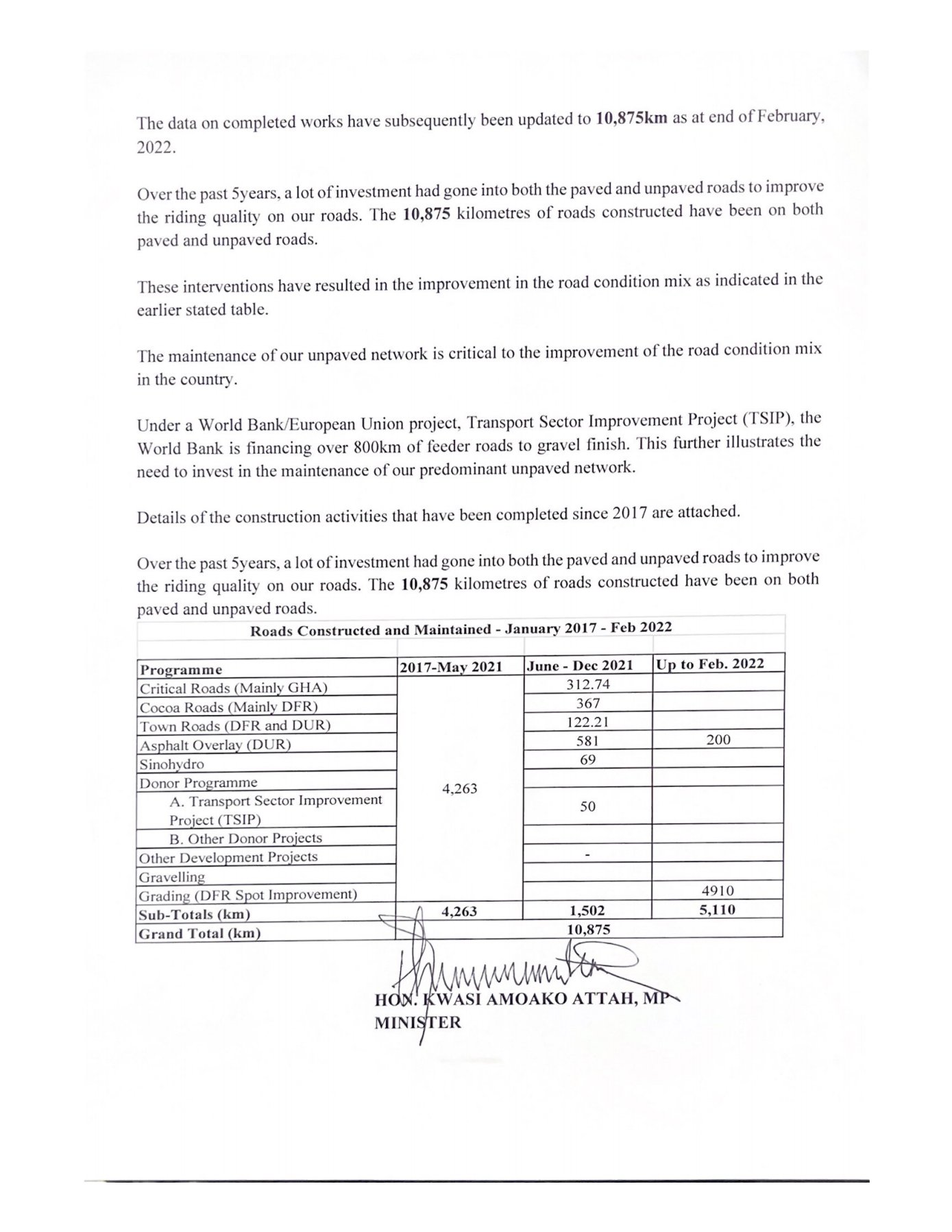 This however will amount to gross misrepresentation of facts as the ministry will be suggesting that activities such as spot improvement, grading, gravelling and regravelling of unpaved roads adds to the count of new constructions.

It will be statistically improper to say the gravelling and regravelling of the same 5 kilometer road amounts to 10 kilometers of new roads constructed.

The ministry’s explanation is therefore untenable and rather goes to buttress the point that the ‘10,875 kilometers of new roads’ were NOT constructed within five years as claimed by President Akufo-Addo

I'm Adwenpa-Hene |Blogger & Broadcaster Journalist. I am the CEO and manager of this noble website. I publish on Entertainment, Sports, Politics, Lifestyle, and Technology. You can also follow Us on : YouTube Channel - My Ghana Media TV, Facebook - MyghanaMedia TV , Twitter - @MyGhanamedia2 & Instagram - My Ghana Media TV. Email Address: [email protected] Contact Us: 0200818719
@@MyGhanamedia2
Previous FIFA World Cup 2022 Draw: All You Need To Know And How To watch It In Ghana
Next ‘Do Better’: Ghanaian Triple Jumper Slams Nana Addo For Meeting Black Stars And Ignoring Black Princesses