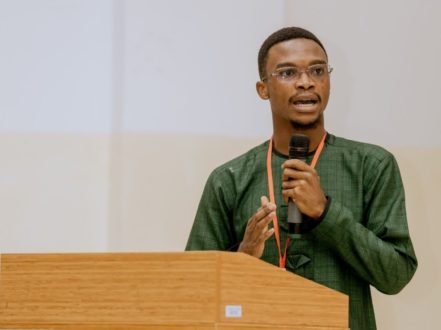 The General Secretary of the National Union of Ghana Students (NUGS), Julius Kwame Anthony, has said that the Union’s national executive elections which took place during its 56th Annual Congress at the GNAT Village in Ejisu Abankrom, has been marred by malpractices.

According to him, based on the infractions that have characterised the process, the outcome cannot be deemed as credible.

The assertion by the NUGS General Secretary, was in reaction to earlier reports on social media which alleged the electoral irregularities and political schemes.

Speaking in an exclusive interview with,  Mr. Anthony, he affirmed the reports on social media; adding that as the Secretary of the Union, he is scandalised by the turn of the events.

In his submissions, he explained that based on the NUGS Constitution, it is his responsibility to collate the Voters Register for elections at the Union’s Annual Congress. But according him, some of his colleague executive members took up that role and generated a register without his knowledge.

This, Mr. Anthony said, was part of a deliberate plot to favour one of the presidential aspirants in the elections, Mr. Dennis Appiah Larbi-Ampofo.

“The Constitution is clear on how elections are supposed to be conducted and who hands over members in good standing to Congress, and for that matter, those members are recognised to vote in the election. Now as we speak, the elections today, the Voters Register or the list of members that was used was just conjured from somewhere.

I am the General Secretary, I am responsible for that, to compile the list, and that list is supposed to be counter-signed by the President. So I sign and he counter signs and it’s handed over to the EC. Today the Electoral Commission, someway somehow had the membership roll from aspirants. The Financial Secretary is supposed to clear members in good standing. Which means they’re supposed to pay their dues and all that.

But he told me that he cannot give me some of the members who have paid their dues because Mr. Dennis Larbi Appiah has submitted list of delegates directly to the Electoral Commissioner. A candidate for the election is the one who is clearing members in good standing and submitting them directly to the Electoral Commission. And those people are not even students”, he said.

Julius Anthony further alleged that, while on the Congress grounds, Dennis Appiah Larbi-Ampofo, then bused unknown individuals to the Congress grounds to vote as students, from schools that had not even been verified as institutions in good standing.

“Which election is done, where people don’t know the total number of people on the voter roll? The ECs would not even give us that. The agents of candidates were asked to sit in a very far distance. The NUGS Facebook handle has put out the arrangement over there and the election was held in a tent out of public view.

Only those who enter and drop the ballot are able to see it. It’s so appalling and sincerely the outcome of this election cannot be accepted as a reflection of the will of students of this country. It cannot be accepted. The process was flawed from day one”, he stressed.

In expressing his grievances over the process, Julius Anthony further disclosed that as part of the manipulations, some candidates were deliberately disqualified by the Vetting Committee a night to the elections, in order to prevent them from seeking appropriate legal redress.

But responding to these concerns, the President of the Union, Emmanuel Boakye Yiadom, dismissed the claims by the Union’s General Secretary, Julius Kwame Anthony. He stated that the Congress has been smooth and devoid of any electoral malfeasances, as alleged by Mr. Anthony.

See also  "Mischievous And Dishonest" People Will Argues That Akufo-Addo Is Not Corrupt - ADAM-GH Fired.

Contrary to the suggestions by the NUGS Secretary, the President, Mr. Yiadom said the Union is not divided; adding that he is surprised about the posture and comments of Julius Kwame Anthony.

I'm Adwenpa-Hene |Blogger & Broadcaster Journalist. I am the CEO and manager of this noble website. I publish on Entertainment, Sports, Politics, Lifestyle, and Technology. You can also follow Us on : YouTube Channel - My Ghana Media TV, Facebook - MyghanaMedia TV , Twitter - @MyGhanamedia2 & Instagram - My Ghana Media TV. Email Address: [email protected] Contact Us: 0200818719
@@MyGhanamedia2
Previous Govt Has Not Paid Student Loans For About 2 Years – NUGS President
Next Akufo-Addo Cannot Complete Projects Under Agenda 111 Before The End Of His Second Term – Mahama Ayariga