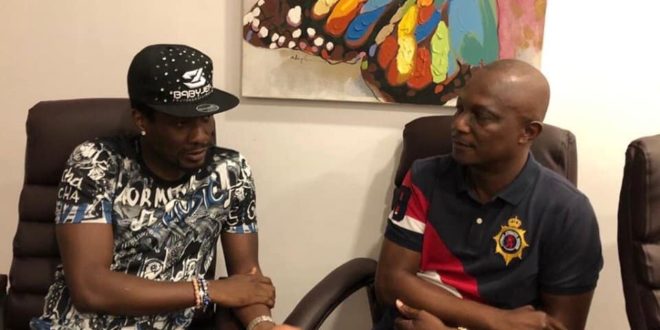 Former Black Stars Captain,  Asamoah Gyan has fired back at former Ghana coach Kwasi Appiah, who blamed the Black Stars’ defeat to Portugal in the 2014 World Cup on the players’ fixation on money.

Ghana will face Portugal again at the global showpiece after being drawn into the same group in the 2022 FIFA World Cup draw on Friday.

It is a rematch of the 2014 group stage match, which the Portuguese won 2-1 thanks to Cristiano Ronaldo’s second-half close-range strike.

As a result, Ghana were eliminated in the first round after finishing last in a group that included eventual winners Germany and the United States.

The draw on Friday reminded Ghanaians, especially former Black Stars coach Kwasi Appiah, of the encounter in 2014, and the former coach made a surprising statement.

He said, “In the 2014 World Cup against Portugal, the Black Stars players had their money in their bags in the dressing room and were not concentrating on the game.”

But Appiah’s revelation has been refuted on Twitter by Gyan, who scored a great header in the encounter.

“Yes, because he had satellite in our bags. Smh. Every time we find somebody to blame,” Gyan wrote. 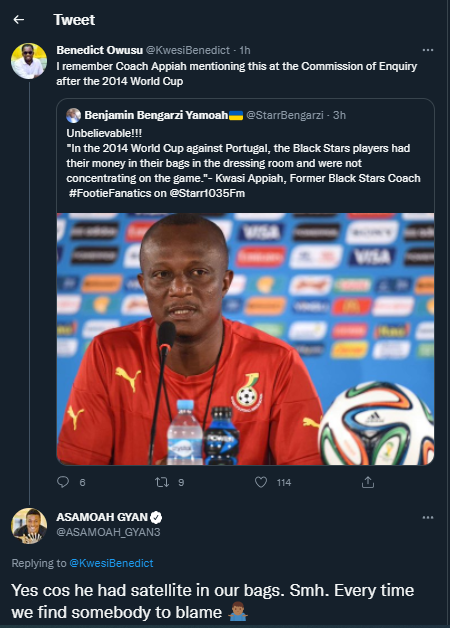 The tweet drew numerous replies, with some supporting Gyan and others against him.

Those who disagree have shared the infamous picture of defender John Boye kissing money hours before the game. Ghana flew $3m to Brazil to appease World Cup squad over bonus dispute. Each player got a reported $100,000.

I'm Adwenpa-Hene |Blogger & Broadcaster Journalist. I am the CEO and manager of this noble website. I publish on Entertainment, Sports, Politics, Lifestyle, and Technology. You can also follow Us on : YouTube Channel - My Ghana Media TV, Facebook - MyghanaMedia TV , Twitter - @MyGhanamedia2 & Instagram - My Ghana Media TV. Email Address: [email protected] Contact Us: 0200818719
@@MyGhanamedia2
Previous Ghana Premier League: Hearts of Oak Climb To Top Four After A Win Over Medeama SC In Week 23 Fixture
Next Athletic Bilbao Striker Inaki Williams Is Likely To Play For Ghana