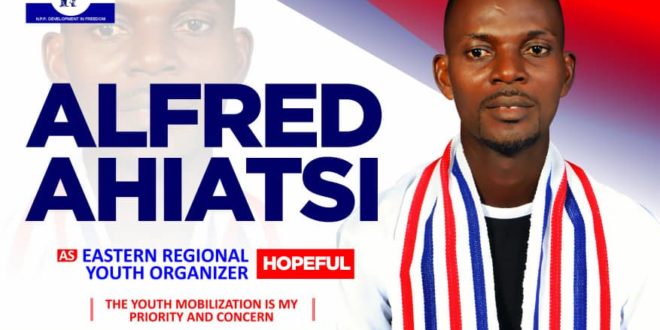 A national communication team of the ruling New Patriotic Party (NPP) and a convener loyal citizen Ghana, Mr. Alfred Ahiatsi has dropped a strong hint that he will stand for his party’s Eastern regional organiser position in the forthcoming Internal elections.

Mr. Alfred Ahiatsi has been a key personality in youth development.

With a solid track record in politics as well, the national communication team has used both aspects of his background to appeal to voters and mobilise support for the party since joining the party.

He said when it came to grassroots mobilisation, he had the track record and mentioned that he currently heads an organisation with a focus on helping teenage expectant mothers to start a trade, as well as put them back to school after delivery.

According to him, the NPP will need to consolidate its gains and will therefore, need a successful youth mobiliser to understand how to get the numbers for the party in its quest to break the eight-year power alteration in the country.

Mr. Alfred Ahiatsi said he is aware that the NPP members in the region could count on his ability to connect with younger voters to increase the party’s appeal to the masses.

Announcing his intention to the MyGhanaMedia.com, he expressed the hope that the party would take a cue from this tradition and vote for he to bring the needed dynamism to the position.

In the view of Mr. Alfred Ahiatsi , the NPP needed a youth leader who could organise the youth in particular, both within the party and outside the party to vote for the NPP during elections.

He opined that no political party could come to power on the support of party members alone, saying it was her key objective to attract floating voters, as well as win more voters from other political parties.

There is much excitement amongst the grassroots of the ruling New Patriotic Party (NPP) in the Eastern Region following the decision by a member of the national communication team and convener loyal citizen Ghana, Mr. Alfred Ahiatsi to contest for the regional organiser position.

Many NPP supporters, sympathizers and delegates who spoke to the MyGhanaMedia’s editor in confidentiality were hopeful that the coming of Mr. Alfred Ahiatsi will spark a new light that will help the party win the 2024 general elections.

In their view, the member of the national communication team of the ruling New Patriotic Party possesses all the qualities of a party organizer including being diligent, hardworking, and respectful.

As such, they believed that Mr. Alfred Ahiatsi stands out due to his said qualities.

Known who Alfred Ahiatsi is a Member of NPP national communication team all this while and now , he use his own resources to radio and TV station across the globe, Alfred Ahiatsi is convener loyal citizen Ghana,

A civil society organization that help to promote government programs .When it comes to organization, and strategies to win souls he has the experience perfectly, in making .

Alfred Ahiatsi is a Chief Executive Officer of Fredb B construction and consult WHICH A building and road construction company.