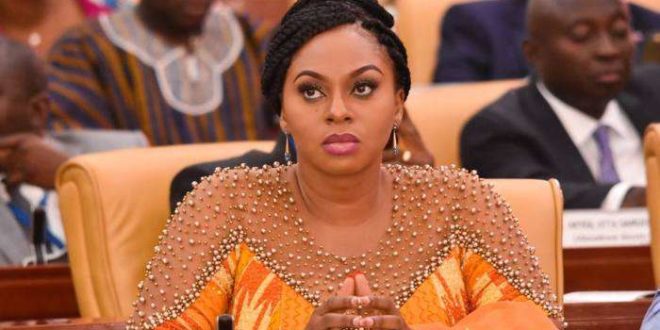 Privileges C’tee Member To Dome-Kwabenya MP : Don’t Force Us To Table A Motion To Expel You, Resign Honourably

A member of the Privileges Committee of Parliament has called on Member (MP) for Dome-Kwabenya Constituency, Sarah Adwoa Safo to personally take a decision to resign from the legislature.

Mr. Michael Okyere Baafi said the embattled lawmaker should not force the Majority caucus in Parliament to table a motion for her expulsion as most of the members are not happy with her conduct for the past few weeks.

“For me, she has not conducted herself well,” the New Juaben South MP told Media General‘s Komla Klutse  in an interview on Tuesday, April 5.

“And her political ratings now automatically will come down because people are not satisfied, especially members of the Majority caucus are not happy with her.

“And so I think she should take the decision and that she shouldn’t sit down for any person in leadership or in caucus to table a motion for her to be expelled from the party or to be pushed out.”

This suggestion by Mr Okyere Baafi comes after Adwoa Safo and two other MPs were on Tuesday referred to the Privileges Committee by Speaker of Parliament Alban Sumana Kingsford Bagbin.

The three including Assin Central’s Ken Ohene Agyapong and Ayawaso Central’s Henry Quartey are said to have absented themselves from sittings more than 15 times in contravention of the Standing Orders.

The New Juaben South MP insists that in the case of the Dome-Kwabenay MP, “she is well and she is doing well” and it will serve her best interest to resign for “the good people of Dome-Kwabenya to get good representation in Parliament”.

“She cannot treat them like that. It is not too good.”

I'm Adwenpa-Hene |Blogger & Broadcaster Journalist. I am the CEO and manager of this noble website. I publish on Entertainment, Sports, Politics, Lifestyle, and Technology. You can also follow Us on : YouTube Channel - My Ghana Media TV, Facebook - MyghanaMedia TV , Twitter - @MyGhanamedia2 & Instagram - My Ghana Media TV. Email Address: [email protected] Contact Us: 0200818719
@@MyGhanamedia2
Previous Today’s Newspaper Headlines; Wednesday, April 6, 2022
Next Massive Blow For Asante Kotoko As Isaac Oppong Ruled Out Of Rest Of The Season