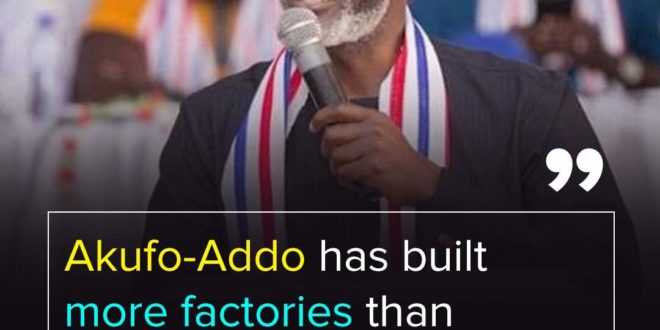 Co-founder of Danquah Institute, Gabby Otchere-Darko, has asserted that, President Akufo-Addo has built more factories than any government in the history of Ghana.

According to the NPP stalwart, the infrastructural investment of the ruling New Patriotic Party (NPP) is unparalleled, and cannot be compared to that of any other regime.

Speaking at a forum by the NPP’s National Youth Wing, where the Vice President, Dr. Bawumia is expected to address the nation on the economy, he noted that the New Patriotic Party has excelled in many areas of the country’s development.

Mr. Otchere-Darko noted that, despite these remarkable feats, the party is still being criticized for poorly governing the country.

“When you look into the record of this country, this government has invested in making sure that more industries are built than any government in the history of this country, since Nkrumah. We were told Nkrumah was the one who was industrialising Ghana. How many factories did Nkrumah build? And how many factories have been built over the last five, six years? Yet we are afraid to talk about these things,” he stated.

Touting the achievements of the ruling New Patriotic Party, he further argued that based on available records, the party has done better in areas such as the fight against corruption and police-military development than any other government.

This he added, are evident for all to see.

“Where does the money go when you invest in anti-corruption institutions? When you see their budgets going up two, three or, four times. Yet we get accused of that.

“This government has invested in the army, the army forces that any government, the evidence is there”, he emphasised.
Akufo-Addo has built more factories than Nkrumah, other presidents – Gabby Otchere-Darko

See also  Anti-LGBTQI+ Bill: "There Is No Law That Is Enacted That Way" - Majority Leader On Public Display of MPs’ Votes

Touching on government’s achievement in agriculture, Mr. Otchere-Darko added that, “This government has invested in agriculture more than any government, and I’m talking about both real terms and nominal terms, in terms of numbers.

When you invest in Agric, what do you do? It’s in fertilizer, it’s in extension workers. The evidence is out there. It’s in the warehouses that are being built”.

In his estimation, government’s Agenda 111 initiative has also contributed to the growth of the health sector, more than any government that has steered the affairs of this country. He also praised government for protecting customers, during the banking sector crisis.

The assertions by Gabby Otchere-Darko, were part of his opening remarks, ahead of the Vice President’s address on the economy on Wednesday.