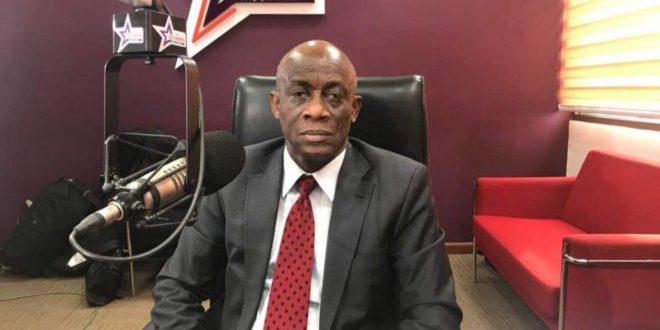 A former Finance Minister,  Seth Terkper has the Vice President Dr Mahamudu Bawumia has only confirmed that the borrowing that was done by the John Mahama administration yielded results.

“Borrowing and infrastructure: grateful to the Veep for highlighting the NDC’s projects in the debt stock. He just debunked the notion that our borrowing did not have any significant underlying assets or infrastructure. Remember, there was denial of their existence not long ago,” Mr Terkper tweeted after Dr Bawumia’s public address on the economy on Thursday April 7.

He added “The fiscal deficit in 2016 was 6.1% (see MOF correction in March 2021 Statement) without NPP’s “offsets” of ghc5 billion for 2016. The NPP’s deficits exclude “bailout costs”, which without a provision in 2017 (despite ESLA) is still the lowest?

Dr Bawumia listed the projects that have been undertaken through the loans that the Akufo-Addo administration has contracted over the years.”

Dr Bawumia further stated what has accounted for the high public debt.

According to him, in addition to the Covid expenditure, the banking sector clean up exercise and payment of excess power in the energy sector as a result of the contracts signed by the National Democratic Congress (NDC) administration, accounted for the rising pubic debt.

Regarding the Covid spending, he stated that the government needed to save the lives of the people hence the decision to prioritise spending in the health sector in order to restore the health of the people.

Dr Bawumia noted that spending in all these areas cost the government ¢50.1billion.

But for the banking sector and the Excess Energy payment, he said the debt would be hovering around 68 per cent instead of the 81 per cent.

“Between 2019 and 2021 Ghana’s debt to GDP increased by 17.6 percentage points of GDP. It should be noted that without the 15.1 billion of the exceptional items – the financial sector and then the energy and Covid Ghana’s debt to GDP would have been about 68 per cent instead of the current 80 per cent,” he said.

The Head of the Economic Management team further attributed the current hardships in the Ghanaian economy to the ongoing geopolitical tension between Russia and Ukraine.

The warfare therefore affected the local economy, he said.

“The increase in commodity prices has been exacerbated by the Russia-Ukraine conflict. Russia and Ukraine together account for 30 per cent of the global wheat export. The longer the conflict the greater will be the disruptions to global food supply. The country is also likely to slow global growth.

“Russia accounts for some 30 per cent of Ghana’s imported grains, 50 per cent of flour and 39 per cent of fertilizer . So we are directly affected by the Russia-Ukraine ware. Unfortunately, we do not know when it will be over. The global increase in fuel prices is causing hardship.”

He further said he recognizes that the country is going through some challenges at the moment.

He however indicated that some measures have been introduced by the government to ameliorate the hardship the people are going through.

He said “from the man on the streets to the business mogul, the health of the economy is the foundational instrument.

“The economy is what we feel in our pockets. I acknowledge that we are going through difficult times, this is the reality. Our economy is experiencing rising prices of fuel and virtually all commodities. Prices are on the rise.”

“These have come at a surprise to many Ghanaians and many questions have been asked about the state of the economy. These questions include what has happened to the fundamentals? Why are the prices of goods and services increasing so fast? Why has the Cedi depreciated so fast this year?

“What programess does the government have to show for the higher debt? Where is the new economy that the government promised to build? I will address these questions based on data and fact.

“I will admit where there have challenges and we will all leave here with a better state of the economy, where we have come from and where we are going.”