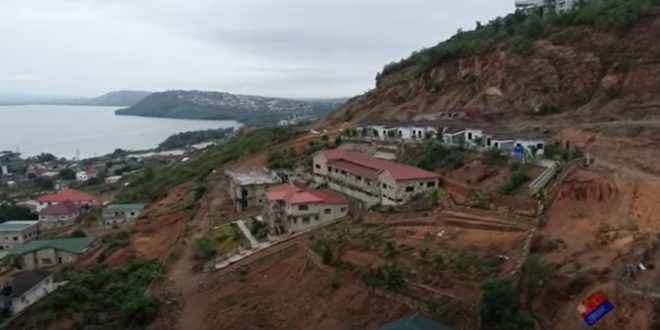 Experts in seismology have warned that parts of the Weija Hill close to the tollbooth face imminent collapse.

According to them, human activities such as sand mining and blasting of rocks have affected that part of the ridge; hence a heavy rainfall or earthquake in the area can result in a landslide.

A visit by JoyNews to the area discovered that residents usually experience tremors at night, a development that has caused a significant panic and fear among them.

In an interview with Maxwell Agbagba on the Joy In My Community programme, Principal Seismologist Nicholas Opoku hinted that the entire hill is unstable, especially the part closer to the tollbooth.

He added that other areas have soft rocks, making the mountain extremely weak to stand any heavy rainfall or an earthquake.

“Because it is also an earthquake-prone zone, it has undergone various shaking in the past so that you can see a lot of fractures in the rocks; they are actually weak. So it makes the place more prone to landslides.

“Even under gravity, you can have a landslide, and these landslides are also normally exacerbated by earthquakes. So it also compounds the risk of a landslide in the area.

“The materials are loose; so, when it rains heavily, it adds so much loads to destabilise the slope,” he said.

A resident who has been living in the area for the past two decades expressed concern about the quarrying activities on the hill.

Samuel Okine, however, stated that the phenomenon has been brought under control for some time now after the intervention of city authorities.

“Sometimes, you experience it twice or three times a day; it’s very sharp. You get up on your bed, and it goes. There is an erosion part there, which could be a landslide one day. Living at the edge is dangerous, and people still quarry stones,” he lamented.