Breaking News
Home / BUSINESS NEWS / Jospong Group CEO: I Set Up My First Company With A ¢3 Loan From My Mum 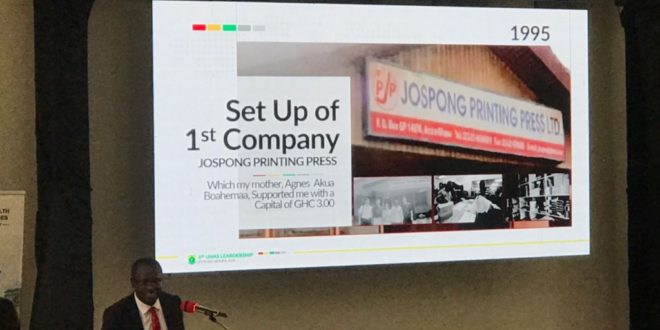 Jospong Group CEO: I Set Up My First Company With A ¢3 Loan From My Mum

The Founder and Executive Chairman of the Jospong Group of Companies, Dr. Joseph Siaw Agyepong, has revealed how he leveraged a GHC3.00 his mum loaned him, to become one of the biggest business moguls in Africa.

According to him, after being compelled to manage his mother’s bookshop after his second cycle education, he quickly grabbed an opportunity to establish a printing press to meet demands in 1995.
This gave birth to the Jospong Printing Press, which he established with the loan of GHC3.00.

With perseverance, commitment and the guidance of God, Dr. Siaw managed the printing press efficiently and has since established several companies, hence the accolade “serial entrepreneur” bestowed on him.

He revealed this when speaking at the University of Health and Allied Sciences 6th Leadership Lecture Series in memory of the late President Evans Attah Mills, under whose tenure the University was established.

It was themed “Sustaining Environmental Sanitation Gains through Specialized Education.”
Being the 5th of 17 children of his father, Dr. Siaw had to share a small household with his siblings and parents in Odubi during his early life.

After his basic education, he continued to the Royal Technical Institute at Nungua in Accra where he studied for the City and Guilds London Certificate, completed in 1990.

He, however, had to abandon his dream of becoming a pilot or marine engineer due to a lack of funds and join his mother who was operating a bookshop.

He detailed that he hawked exercise books on the streets of Accra for a period, where he learned a major skill in business.

“I learnt some valuable marketing and negotiation skills on the job while selling my mother’s exercise books on the busy streets of Accra”, he said.

Dr. Siaw took over management of his mother’s business when she fell ill.

He went ahead to establish the Excellent Building and Construction Limited in 1996 and the Appointed Time Screen Printing Company after 4 years when he got an opportunity to print t-shirts for political parties during the 2000 electioneering campaign.

Upsurge in filth in Ghana leading to challenges in public health prompted him to set up Zoomlion Ghana Limited, which has become one of the leading waste management firms in Africa.

Dr. Siaw didn’t stop there, he is currently pursuing the objective of recycling waste and producing fertilizer to help curb the perennial shortage and hike in prices of the product in Ghana.

He eulogized the Late President Mills for his contribution to the development of his companies and his sheer leadership traits.