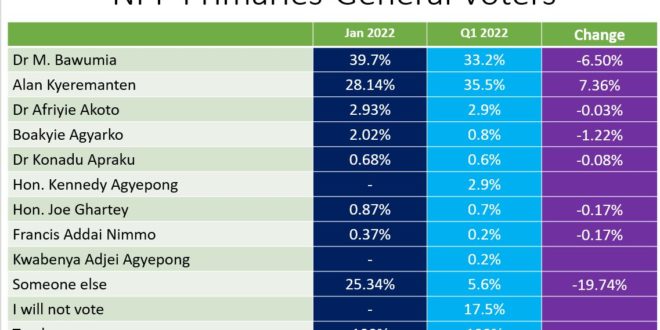 The second national tracking poll conducted by the Global InfoAnalytics Limited has tipped Trades and Industry Minister, Alan Kyeremanten, as the man to lead the New Patriotic Party (NPP) in the 2024 elections.

The polls, which were conducted in all 16 regions in the country, saw Alan Kyeremanten lead the Vice President, Dr. Mahamudu Bawumia by 35.5 per cent to 33.2 per cent.

“In a dramatic shift in the NPP race, the vice president, HE Dr Mahamudu Bawumia has lost his commanding lead in the January poll to Alan Kwadwo Kyeremanten, the Trade and Industry minister in our fresh poll. Alan Kyeremanten now attracts the backing of 35.5% of Ghanaian voters compared to 33.2% for HE Dr Bawumia. Hon. Kennedy Agyepong, MP for Assin Central and Dr Afriyie Akoto, Minister of Agric were tied with approximately 2.9% of the votes each.

The poll sampled 5,182 voters in 68 constituencies in all 16 regions with confidence interval of 99% and Margin of Error of 1.79%.
Face to face interview of voters were conducted between 7th April to 18th April 2022.

The Trades Minister had turned fortunes to take the lead in the second survey. Dr. Bawumia won the first poll which was conducted in January this year by 40 per cent as against 28 per cent for Alan Kyeremanten.

The 2020 Presidential candidate for the NDC led his opponents with 57 per cent while Dr. Kwabena Duffour had 12 per cent.

The poll also shows the president’s job approval rating declining from 34% in January 2022 to 27% in April.

“NDC Primaries- Mahama popularity soars as 57% of voters back him to lead the NDC again in 2024 according a new poll released today 20th April 2022. The former finance minister Kwabena Dufour in distance second with 12% of the votes whilst Kojo Bonsu, the former mayor of KMA was third with 4%.”

On the subject of the E-levy, the survey revealed that 40 per cent of Ghanaians will transfer money through electronic platforms only when necessary after the implementation of the levy.

Twenty-six per cent of the population noted that they will withdraw their funds so as not to be taxed 1.5% of every transaction that exceeds GHC100 daily.

Per the survey, 18 per cent chose to find alternatives in order not to be taxed.

According to 9 per cent of those who participated in the survey, they will continue to engage in electronic transactions despite the implementation of the e-levy.

“New polls shows 40% of MoMo users will only use when they have no other option. 26% plan to withdraw their funds from their MoMo accounts when it is introduced with 18% saying they will find ways to avoid paying the tax. 9% said, the tax will not have any effect on how they use MoMo. 7% of respondents did not have MoMo account.
The poll samples 5,182 respondents nationwide and has margin of error of 1.79% at 99% confidence interval.”

For the first time in our nationwide tracking poll since 2019, NDC affiliate voters outnumber those of the NPP by approximately 2% according to our latest poll. The poll was carried between 7th -18th April 2022 in 68 constituencies in all the 16 regions with a sample size of 5,182. A forth voting bloc is also emerging according to the poll as voters who said they support other parties other than CPP, PNC and PPP outnumber floating voters.

Click on the link below to view the National Tracking Poll