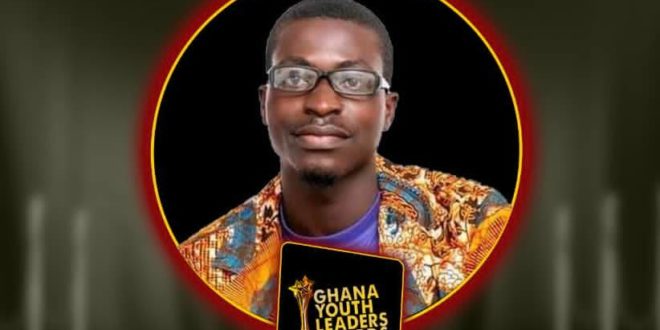 Adwenpa-Hene Kofi Mensah was named Best Blogger of the Year at the recently concluded 2022 edition of the Ghana Youth Leader Awards, which took place on Saturday, 23rd April 2022 at the GNAT Hall in the Greater Accra region.

Adwenpa-Hene Kofi Mensah, known in private life as Mensah Francis, has been nominated on several occasions by different award schemes for his hard work.

The first-time award-winning blogger, speaking at the event after the award presentation, thanked all those who contributed to his victory.

The maiden edition of the Ghana Youth Leader Awards welcomed a number of dignitaries who graced the occasion and were honored at the awards night.

Adwenpa-Hene Kofi Mensah, is one of the few Ghanaian bloggers/content creators who are working tirelessly to create more local content.

He is a Broadcast Journalist as well working with Akyem Aboabo based, Ahenkan FM as Akan Newscaster and morning show producer.

As Broadcast Journalist, he grabbed ‘Best Youth Radio Presenter Of The Year’ at the Main edition of Youth Awards Ghana (YAG) 2020.

I'm Adwenpa-Hene |Blogger & Broadcaster Journalist. I am the CEO and manager of this noble website. I publish on Entertainment, Sports, Politics, Lifestyle, and Technology. You can also follow Us on : YouTube Channel - My Ghana Media TV, Facebook - MyghanaMedia TV , Twitter - @MyGhanamedia2 & Instagram - My Ghana Media TV. Email Address: [email protected] Contact Us: 0200818719
@@MyGhanamedia2
Previous 2024 Polls: Asare Bediako Is Our Best Bet To Secure Massive Victory For NPP In Ashanti Region
Next Stay Neutral In The Manhyia South NPP Elections Or Face Our Riot – Group To Napo.