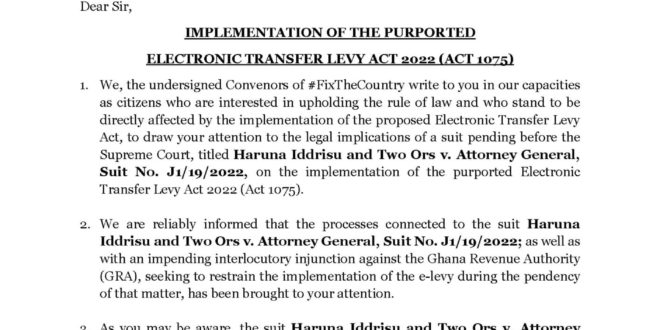 Conveners of social advocacy group, FixTheCountry Movement, have issued a caution to the Ghana Revenue Authority (GRA), urging the revenue agency, to hold on with the implementation of government’s 1.5% E-levy policy.

According to the social advocacy group, there is a pending suit at the Supreme Court, challenging the constitutionality of the tax policy, and therefore the GRA should be mindful with its implementation.

In a statement issued on Wednesday, the group explained that based on previous rulings of the Supreme Court, it will be unlawful for the GRA to proceed with the implementation of the levy, which has been scheduled to take place from May 1, 2022.

“As you may be aware, the Supreme Court of Ghana and other superior courts have in several decisions held with unflappable consistency that the knowledge of the pendency of a suit as well as the filling of an interlocutory injunction application compels a person to:

(a) refrain or abstain from taking any step that prevents the court from discharging its judicial function and brings the authority and administration of the law into disrespect.

(b) avoid any conduct that affects the res litiga;

(c) conduct by persons that render a pending application otiose and exposes the Court process to ridicule”, portions of the statement read.

The cautionary statement, which was signed by the group’s Associate Programmes Officer, Benjamin Darko, also warned that, any action, including the GRA’s decision to commence implementation of the levy on 1st May, 2022, will expose the Authority and the Commissioner-General to contempt charges.

The group further stressed that, based on the previous rulings of the Court, and given the fact that, there is a pending suit by the Minority in Parliament, “the Ghana Revenue Authority must hold off implementing the Electronic Transfer Levy Act 2022 (Act 1075), until a competent Court declares otherwise”.

It will be recalled that on March 30, the Minority Leader in Parliament, Haruna Iddrisu, and his colleagues Mahama Ayariga and Samuel Okudzeto Ablakwa, dragged the Attorney-General to the Supreme Court over the approval of the Electronic Transactions Levy (E-Levy).

The legislators contended that Parliament did not have the required number of at least half of its members present, when the controversial tax policy was approved.

The Tamale South MP and his colleagues therefore prayed the Supreme Court to declare that the said approval was contrary to law.

In their suit, they sought the following reliefs:

b. A declaration that on a true and proper interpretation of articles 2(1)(b) and 104(1) of the 1992 Constitution of Ghana, there was no quorum to enable the 137 Members of Parliament of the Majority Caucus present in Parliament on 29th March, 2022 to pass the Electronic Transactions Levy (‘’E-Levy’’).

d. An order of the Honourable Court setting aside the passing of the Electronic Transactions Levy (‘’E-Levy’’) by the 137 Members of Parliament of the Majority Caucus present in Parliament on the 29th of March, 2022 as a nullity.

e. Any other order(s) the Honourable Court may deem fit”.

Regardless of this suit, the Ghana Revenue Authority (GRA) has announced May 1st, 2022 as the implementation date for the Electronic Transaction Levy (E-Levy).

In a notice published in the newspapers, the GRA said the decision was influenced by the passage of the E-Levy Bill by Parliament. As a result, the GRA have already begun with campaigns to sensitize the public about the implementation of the controversial levy.

But the FixTheCountry Movement believes that the GRA should not proceed on that path. They have therefore called on the Authority to suspend the implementation of the levy. According to the group, if the GRA does not heed to its caution, they will take legal actions against them.

“In this connection, we ask that the Ghana Revenue Authority resile from its intention to commence the implementation of the Electronic Transfer Levy Act 2022 (Act 1075).

We also draw the attention of the Ghana Revenue Authority to the fact that any conduct including its decision to commence implementation of the Electronic Transfer Levy Act 2022 on the 1st of May 2022, as publicly stated exposes the Authority, and you the Commissioner-General to contempt charges.

We indicate our preparedness to take all law-based actions, including direct actions to prevent the violation of the Constitution, as required under Articles 3 and 42 of the 1992 Constitution; to the initiation of contempt proceedings against the Commissioner-General and the Authority should it fail to observe the law”, the statement concluded.