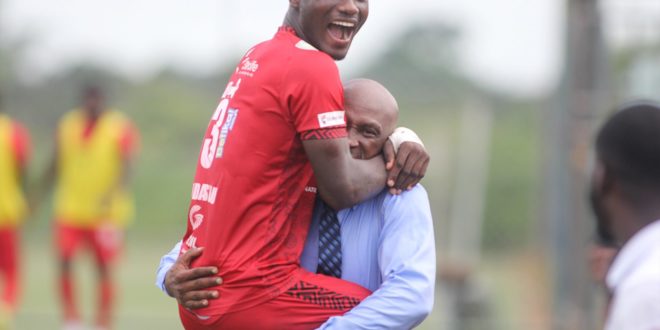 Kumasi Asante Kotoko ended their two game losing streak as they consolidated their grip on the Ghana Premier League title.

The reds recorded their first ever win at the Sogakope Park against West African Football Academy Sporting Club (WAFA) on Saturday afternoon.

It was the usual suspect Frank Mbella Etouga who gave the league leaders the win and only goal of the game in the second half.

Kumasi Asante Kotoko made the first real move when in the 3rd minute they had a shot on target saved by the WAFA goalie before Kotoko’s Andrews Appau gave the ball away for a counter attack.

On the stroke of half time WAFA went close with a free kick from Emmanuel Agyemang but it shaved the crossbar and went wide.

There was nothing to separate the two sides in the first half as the game ended 0-0.

Asante Kotoko took the lead in the 64th minute of the second half after Andrews Appau set up Frank Mbella Etouga for his 18th league goal of the season.

See also  Odike To Kumasi Traditional Council: Nullify Banishment Before I Can Come And Apologise