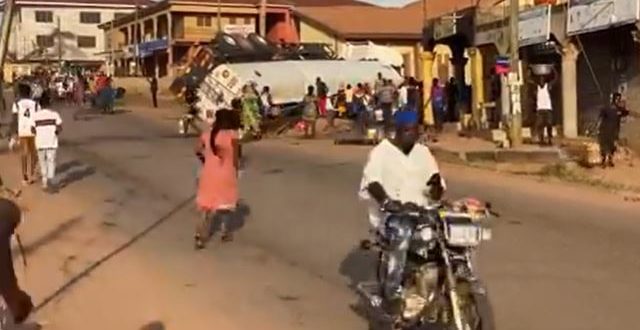 There was a mad rush for fuel at a town believed to be Kaase, a suburb of Kumasi in the Ashanti region after a diesel tanker toppled over.

Although the details of how the accident happened are yet to be made public, in the video that has gone viral, residents of the community can be seen rushing to the accident scene with buckets and various containers for their share of the ‘free diesel’.

Netizens who have reacted to the video are outraged, particularly because a similar incident which claimed the lives of many, destroyed not only properties but a whole community, and rendered many homeless, happened barely four months ago at Appiatse near Bogoso in the Western Region.

“Ghanaians do not learn,” a man identified as Owusu Bempah Ayala tweeted after posting the video.

It will be recalled that on January 20, 2022, an explosion that occurred at Appiatse a town near Bogoso, claimed 13 lives leaving 59 others severely injured, including a 15-month-old baby.

The incident which occurred as a result of an accident involving a truck conveying explosives for a mining company, a motorcycle, and a third vehicle close to an electricity transformer, reduced the town of Appaitse to rubble, killing inhabitants and injuring scores.

Concerns have been raised over the fact that the vehicle could have exploded and could have been a replica of what happened at Appiatse.

I'm Adwenpa-Hene |Blogger & Broadcaster Journalist. I am the CEO and manager of this noble website. I publish on Entertainment, Sports, Politics, Lifestyle, and Technology. You can also follow Us on : YouTube Channel - My Ghana Media TV, Facebook - MyghanaMedia TV , Twitter - @MyGhanamedia2 & Instagram - My Ghana Media TV. Email Address: [email protected] Contact Us: 0200818719
@@MyGhanamedia2
Previous “More Money For The politicians, Small Money For The People Who Stay In Long Queues, Scorching Sun To Vote’ -Yvonne Nelson
Next Revenue From E-levy Will Be Used To Create Jobs, Build Roads And Digital Infrastructure – Government