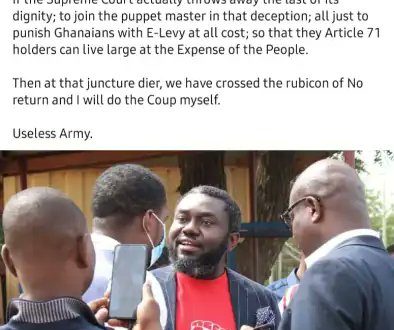 The social media activist and Convenor of the #FixTheCountry pressure group Oliver Mawuse Barker-Vormawor, who was recently arrested by the police and charged with “Treason Felony” for a series of Facebook post he made threatening to stage coup in Ghana, has taken to the same medium threatening to stage a coup again over a pending case on E-levy before the Supreme Court.

In his latest rant on Facebook posted Saturday 30 April 2022, Mr Barker – Vormawor, says; “This Attorney-General does not fear God. He is claiming that the sick and bedridden Chieftaincy Minister actually went into the Chamber and voted for the E-levy even though we all saw that the guy was stuck in his ambulance”.

He goes further to claim as follows: “If the Supreme Court actually throws away the last of its dignity; to join the puppet master in that deception; all just to punish Ghanaians with E-Levy at all cost; so that they Article 71 holders can live large at the Expense of the People”.

“Then at that juncture dier, we have crossed the rubicon of No return and I will do the Coup myself” Barker – Vormawor posted on his Facebook wall.

The #FixTheCountry Convenor repeated his previous claim by describing the Armed Forces of Ghana as being a “Useless Army”.

The Tema High Court on Wednesday (16 March 2022) granted Barker – Vormawor, bail in the sum of GHC 2 million with two sureties, one of whom must deposit documents covering a landed property within the jurisdiction of the court.

Barker-Vormawor as part of his bail conditions is also require him to report to the police once a week.

In a series of Facebook posts that led to the arrest and ongoing prosecution of Mr Barker-Vormawor on the 11 February 2022, he described the Ghana Armed Forces as “useless” for not acting despite the public uproar against the E-levy which is expected to come into effect on 1 May 2022.

“If this E-Levy passes after this cake bullshit, I will do the coup myself. Useless Army!” Barker-Vormawor wrote in one of his posts.

In another post he said: “Okay, let’s try again. If this E-Levy still passes after this cake bullshit, then may God….Help us to resist oppressor’s rule, With all our will and might for evermore. (2x). Useless Army. Anaa, the value is the same?”

Barker-Vormawor has been charged by the state with the offence of treason Felony, contrary to Section 182(b) of the Criminal and Other Offences Act 1960 (Act 29).

According to the charge sheet filed at the Ashaiman district court, the particulars of offence show that the accused, sometime in February 2022, prepared to undertake by any unlawful means an enterprise which usurps the executive powers of the Government of Ghana.

The Convener of the #FixTheCountry pressure group Oliver Mawuse Barker-Vormawor was picked up by the Tema Regional Police on Saturday 12 February 2022, for allegedly stating that he would stage a coup in Ghana if Parliament passes the E-Levy Bill.

A police statement said on Saturday (12 February) that Barker-Vormawor is being kept at the Tema Regional Police Command to assist further investigation of his social media post.

After the charge was read to him in open court on 14 February 2022, Detective Superintendent of Police Sylvester Asare read the brief facts. Barker-Vormawor’s lawyer, Akoto Ampaw, applied for bail for his client but the state opposed the application.

In her ruling, Magistrate Eleanor Barnes Botchway stated that she does not have jurisdiction to grant bail in a case involving the charge of treason felony.

She subsequently remanded the accused person into police custody and by the two weeks’ timeline required by law to have individuals accused on remand make an appearance in court, she adjourned sitting to 28 February 2022.

The brief facts as presented in court by DSP Sylvester Asare state that “the accused person is a lawyer and Convenor of a social movement namely ‘FixTheCountry’.

Sometime in February 2022, the Ashaiman Police received a report that the accused person was inciting some groups of persons believed to be members of the FixTheCountry movement”.

“That on receipt of the report, the police mounted surveillance on the accused person until his arrest at Kotoka International Airport on Friday 11 February 2022, when he arrived from the United Kingdom (UK).

Preliminary investigation has revealed that accused is a lawyer and a PhD student at Cambridge University, UK.”

The facts further say that “it has also been established during investigation that the accused for some time now has been inciting some group of persons through the social media to undertake an unlawful enterprise to usurp the executive powers of the Government of Ghana”.

“Pursuant to his preparation to usurp the executive powers of the Government of Ghana, accused further published on his Facebook wall that the Ghana army is useless and went ahead to declare his intention in a Facebook post to stage a coup if the Electronic Transaction Levy [E-Levy] is passed by Parliament.”

I'm Adwenpa-Hene |Blogger & Broadcaster Journalist. I am the CEO and manager of this noble website. I publish on Entertainment, Sports, Politics, Lifestyle, and Technology. You can also follow Us on : YouTube Channel - My Ghana Media TV, Facebook - MyghanaMedia TV , Twitter - @MyGhanamedia2 & Instagram - My Ghana Media TV. Email Address: [email protected] Contact Us: 0200818719
@@MyGhanamedia2
Previous ‘Implementing E-levy On Workers’ Day Insensitive, We Will Reduce Workers’ Suffering After 2024′ – NDC
Next Dr Bawumia Will Be Ghana’s Next President – Majority Chief Whip Declares