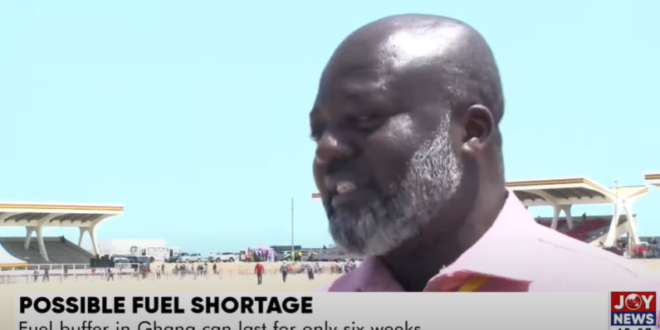 The National Chairperson of the General Transport Petroleum and Chemical Workers Union, Bernard Owusu, has hinted at a nationwide shortage of fuel.

According to him, the expected shortage in the commodity is due to the fact that the current fuel buffer in the country can only last up to six weeks.

Speaking in an interview with JoyNews, he explained that, given the impending situation, government will have to mobilise more revenue to address the challenge.

“As we speak now, if we don’t take time, we might be experiencing petroleum shortage in the country because of this war that is coming from Ukraine and Russia.

Because most of our products are from these countries, so it’s a very difficult situation for the country and at the same time for Ghanaians as well”, he revealed.

Touching on what his outfit is doing locally to avert the looming danger, he stated that the country’s buffer is a ready resort in case of a shortage.

He however stated that, the reserves can only last for six weeks, and therefore the need for government to mobilise more money, and support the BDC and fuel traders.

“There was this discussion that government will like to bring in products through the international traders. Which if that comes through, then it’s going to help us”, he added.

He further disclosed that, countries like Senegal and Kenya do not have such buffer systems, and therefore, they are more likely to feel the brunt of the global fuel shortages.

He however noted that, even though Ghana has a buffer which can last up to six weeks, there is the need for the country to prepare to compete for the commodity, which has now become a heavily sought after commodity on the global market.

Meanwhile, President Akufo-Addo has revealed that government is rehabilitating the Tema Oil Refinery.

According to him, this is part of efforts to stabilise petroleum prices in the country.

The President made this revelation, while addressing workers on the occasion of this year’s Labour Day celebration.

“Intense efforts are being made to rehabilitate the Tema Oil Refinery, to enable it contribute to stabilizing petroleum prices, which should see the light of day very soon,” he said.

President Akufo-Addo also stressed the need for private companies to venture into the arena and assist with the establishment of refineries across the country.

I'm Adwenpa-Hene |Blogger & Broadcaster Journalist. I am the CEO and manager of this noble website. I publish on Entertainment, Sports, Politics, Lifestyle, and Technology. You can also follow Us on : YouTube Channel - My Ghana Media TV, Facebook - MyghanaMedia TV , Twitter - @MyGhanamedia2 & Instagram - My Ghana Media TV. Email Address: [email protected] Contact Us: 0200818719
@@MyGhanamedia2
Previous NUGs Secures Representation On District Scholarship Selection Committee For All Districts In Ghana
Next NDC Government Will Repeal E-Levy Act, If Voted Into Power In 2025 – Mahama Assures Ghanaians