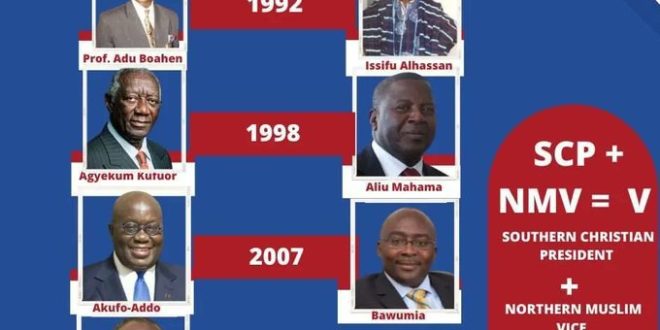 Since the advent of the 4th republican constitutional rule, both NPP and NDC have been strategic in the selection of their Flagbearers.

The NPP since 1992, has always chosen a Southern Christian Flagbearer to partner with a Northern Muslim running mate to achieve a maximum advantage vis-a-vis the geographic and religious dynamics of Ghana.

According to the Collins Dictionary, a masterstroke is defined as, “an action that is very clever and produces success”.

The NPP has been very clever and strategic in the selection of a Flagbearer, primarily to maximize its numbers at the polls and guarantee it a 50+1 victory.

NPP’s master formation, since 1992, is a “Smart Political Formation”.

The founding patriots and kingmakers (delegates) have adhered to this winning formula of a Southern Christian Presidential (SCP) and a Northern Muslim Vice (NMV) since 1992. 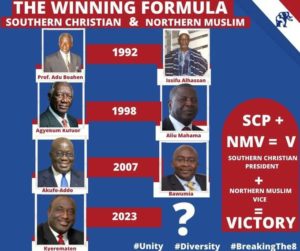 It’s a fact based on empirical research, that the massive votes from the NPP come from the Akan communities.
This geographical representation is a key consideration that has contributed to the selection of who becomes a Flagbearer.

This formation, I can again say is a “Smart Political Formation”. In politics as well as warfare, it’s essential to always play to your advantage. The NPP’s advantage here is rooted in science and data.

It’s also a fact, that about 72% of NPP’s parliamentary seats, representing 99 seats come from the Akan geographical regions.

Therefore, selecting a candidate based on your core geographical base to maximize your votes in your stronghold has been the “winning formula” for the NPP since 1992.

This explains the Southern choice of a Flagbearer that satisfies the geographical distribution of votes from NPP’s core base or strongholds.

The Merriam-Webster dictionary defines a MASTERSTROKE as, a “masterly performance or move”.
It’s empirically established census figures from 2021 Ghana Statistical Service (GSS), that the majority of Ghanaians are Christians.

The figures from the last census, the Christian population was made up of 71.3% Christians.
The selection of the NPP candidate since 1992 has been based again on the science and data that shows that majority of Ghanaians are Christians.

This explains since 1992, the NPP’s choice of Christian Flagbearers to satisfy the political market that is dominated by the Christian faith. Prof. Adu Boahen in 1998, John Kufuor in 1998 and Akufo-Addo in 2007 all Christians.

The NPP’s winning formula, which is an excellent Geo-Religious mix, is one that is rooted in empirical data.
The winning formula, has won the NPP four (4) general elections in the 4th republican constitutional dispensation. (2000, 2004, 2016 & 2020).

Hence, the selection of a Southern Christian (Satisfying the dominant geographical base of the party and dominant religious base of the country), is a masterstroke of bridging the South-North divide.

This strategy puts NPP a step ahead of the NDC in any general election. Politics is a game of numbers and any political party that plays to its advantage is most likely to win.

I'm Adwenpa-Hene |Blogger & Broadcaster Journalist. I am the CEO and manager of this noble website. I publish on Entertainment, Sports, Politics, Lifestyle, and Technology. You can also follow Us on : YouTube Channel - My Ghana Media TV, Facebook - MyghanaMedia TV , Twitter - @MyGhanamedia2 & Instagram - My Ghana Media TV. Email Address: [email protected] Contact Us: 0200818719
@@MyGhanamedia2
Previous RSF Tagged Akufo-Addo’s Administration As Intolerant Of Criticism From Citizens And Media.
Next Violence Tarnishes The Image Of Islam, Desist From It – Chief Imam Advice Muslim Youth