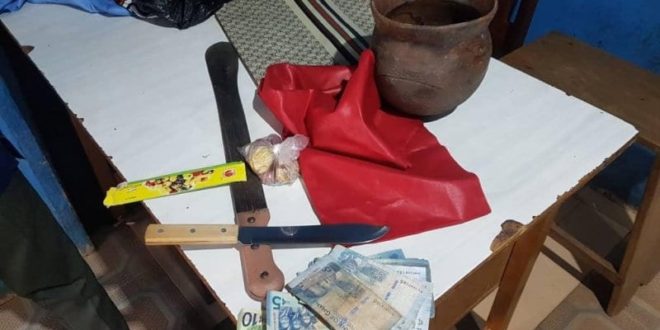 A 38-year-old farmer and resident of Ayisakro, a community near Axim in the Nzema East Municipality of the Western Region, has been sentenced to ten years in prison for attempting to sacrifice his son for money ritual.

Kwabena Ebo was charged for trading of person contrary to sections 2(1) & (2) of the Human Trafficking Act 694 of 2001. The accused pleaded guilty to the charge and asked the court to be lenient with him.

Reading the sentence at the Takoradi Circuit Court B, Her Lordship Abigail Anima Asare indicated that the accused was guilty of the charges preferred against him and as such, deserves a stiffer punishment to serve as a deterrent to others.

The prosecutor, Robert Inspector Yawson, told the court that the accused on Thursday, March 3 offered to sell his 16-year-old biological son (name withheld) to one Francis Odasani, who is popularly known as Nana Tano Kwaw, a renown fetish priest in the area for an amount of GH¢500,000.

The fetish priest told Nhyiraba Paa Kwesi Simpson, the host of the Omanbapa morning show on Connect FM, after the sentence that he was pleased with the court for the punishment.

“I think it is a good punishment. I saw how remorseful the accused was in the courtroom but nothing could have saved him at that particular moment. He will learn his lessons next time,” he indicated.

The accused approached the fetish priest and requested him to use his son for rituals for him to get money.

The fetish priest declined but the accused returned the same day in the afternoon around 1:00 pm pestering him to buy his son for an amount of GH¢500,000.

Seeing how desperate and determined the accused was, the spiritualist feigned interest and promised to get him people who could buy so he should go and bring the son.

The fetish priest informed the Axim Police Command and the accused was arrested when he had bargained with the plain-clothed policemen and had taken an envelope that was supposed to contain the amount at the residence of the fetish priest where they had all met.

The son in question is the eldest of three children the accused had with her former late wife.

The son together with his two other siblings have since been living with their grandmother at Akyerɛso, a village near Akim Oda in the Eastern Region.

The son has become a school dropout because of financial challenges.

The accused, therefore, took advantage of this, and knowing his plan, got permission from the grandmother and brought down the son to Ayesakro to accomplish his mission.

The son has since been sent back to his grandmother in the Eastern Region.