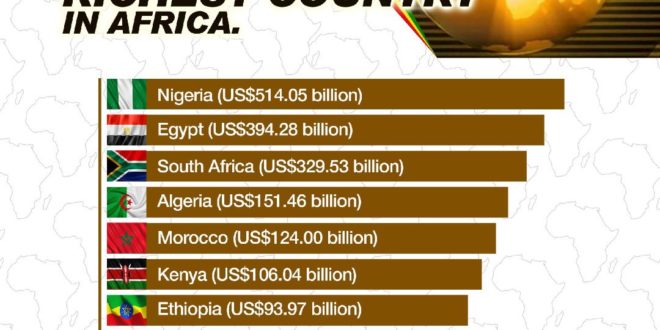 Ghana has been ranked the eighth richest country on the African continent.

The ranking publised on the website If worldpopulationreview.com, indicates that Ghana’s economy as at the end of 2021, was valued at US$74.26 billion, putting it ahead of Côte d’Ivoire, and Angola whose economies were valued at US$70.99 billion and US$66.49 billion respectively.

Ivory Coast and Angola were ranked the 9th and 10th richest countries on the continent behind Ghana.

This is the second time Ghana has been ranked the 8th richest country in Africa and for both years (2019 & 2021).
See also  Today's Newspaper Headlines; Thursday, 20th January, 2022

With an economy valued at US$514 billion, Nigeria was ranked the richest country on the African Continent.

Meanwhile, with Ghana’s GDP valued at US$72 billion and a total population of over 31 million, Ghana’s current per capita income stands at US$2,322.

Some economists and development experts argue that GDP per capita is more important than GDP itself because it reflects how much of a country’s overall wealth actually trickles down to everyone.

Following Nigeria in the second and third places were Egypt and South Africa with a total GDP of US$394 billion and US$329 billion respectively.

Below are the 10 richest countries in Africa: 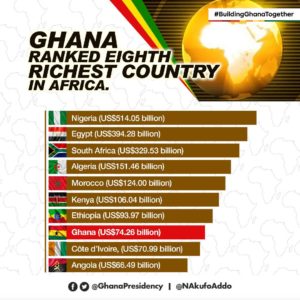 The list put together by Statista saw Seychelles emerge as the African country with the highest GDP per capita.