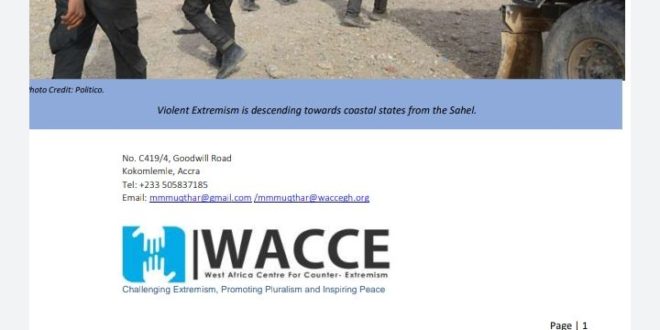 WACCE Report – Ghana Has Been So Close To Terrorism

A report released by the West Africa Centre for Counter Extremism (WACCE) has said Ghana has managed so far to stay safe from terrorist attacks on home soil, yet Ghana has been so close to terrorism.

I'm Adwenpa-Hene |Blogger & Broadcaster Journalist. I am the CEO and manager of this noble website. I publish on Entertainment, Sports, Politics, Lifestyle, and Technology. You can also follow Us on : YouTube Channel - My Ghana Media TV, Facebook - MyghanaMedia TV , Twitter - @MyGhanamedia2 & Instagram - My Ghana Media TV. Email Address: [email protected] Contact Us: 0200818719
@@MyGhanamedia2
Previous UDS Senior Staff To Strik Against Management Of The University
Next Africawatch: When Are We Reading Another Exclusive On Akufo-Addo