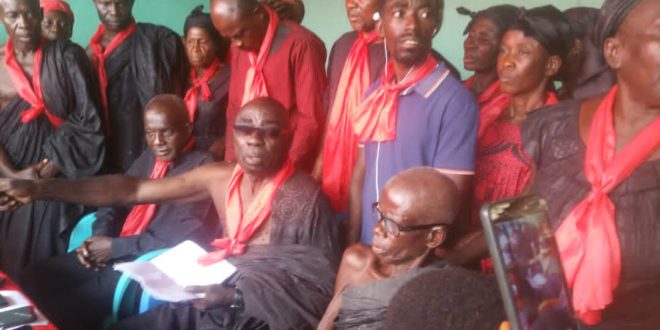 The bid by Dr. Kofi Kodua Sarpong, immediate past Chief Executive of Ghana National Petroleum Corporation (GNPC) to be enstooled paramount chief of the Offinso Traditional Area in the Ashanti Region to succeed the late Nana Wiafe Akenten III has been met with a stiff opposition.

The Asrim and Asona Akonkodease Royal family in Offinso have said they will continue to seek legal redress in what they have described as the illegal installation of a new Chief.

On Friday, May 7, 2022, the Queen, at a brief ceremony, announced K.K Sarpong as the new Chief of the Offinso Traditional Area.

Speaking to the media at press conference , Nana Kwaku Buo, who spoke on behalf of the charged Asrim and Asona Akonkodease Royal family, said they won’t recognize him as their Chief while they take steps to correct the injustice.

According to him, selecting a successor was done without recourse to tradition, the family’s knowledge, and support.

He said Dr.K.k Sarpong is known to be indigene of Sekyere Beposo but claiming to have an ancestral links with the royal Asona family of Offinso. He  added, that the Wiafe Akenten stool has been sold to Dr.K.k Sarpong by the queen mother of the Offinso traditional council with the aim of bringing development to the people of offinso and it’s environs,but the royal family is telling the queen mother ,Nana Ama Serwaa that ,the Wiafe stool is not there for sale but belongs to those who are eligible for the stool.

Members of the family dressed in black and red attire chanted war songs during the press conference .