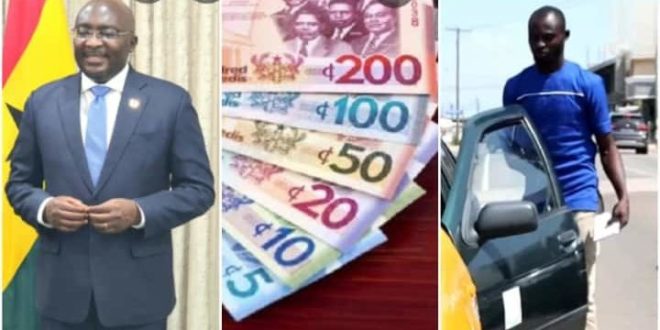 The father of three says when he saw the cash wrapped in a dirty cloth he told his wife that, “good fortune has come to us, but it is not ours”

Those were the words of Kwesi Ackon, an Accra-based taxi driver, to his wife after discovering that a passenger had left GHC8,400 (US$1,114) in his car on Easter Saturday.

Ackon has been working as a cabby for the past seven years after quitting a pharmaceutical company job due to the hazardous nature of his routine.

Earlier this week, a video of Ackon went viral on social media depicting how he returned the whopping sum to Janet Maku Batsa, the trader who had boarded his taxi the night before.

See also  TEWU To Embark On Nationwide Strike From 5 January

“He’s a good man and may God bless him,” Maku said on The Asaase Breakfast Show on Thursday (12 May). “Please help him for me. His kind is rare.”

In the video, the teary market woman could not help but affectionately hug Ackon for his honesty and exemplary show of integrity.

Talking to Kwaku Nhyira-Addo on Asaase Radio, the father of three said he least expected he would shoot to fame overnight following his recent gesture because it has been part of him.

His kind gesture, especially in these economically challenging times has touched many hearts including the Vice-President Dr Mahamudu Bawumia who personally dashed him GHC 20,000.

Also, the VGMA artiste of the year KiDi has also donated GH 5000 while some other individuals have also parted with various sums of money to spur others on to emulate the good deeds of Ackon.

Ackon has been narrating his story to Kwaku Nhyira-Addo on The Asaase Breakfast Show on Thursday (12 May).

Taxi Driver Returned ¢8,
000 to Passenger – The Man the woman is hugging is a Taxi driver and the women is a fish seller at Mallam Atta Market in Accra. pic.twitter.com/S0AcFr4jme