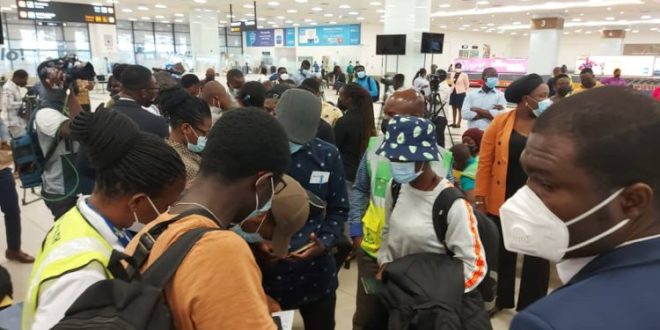 The second batch of Ghanaians who fled troubled Ukraine to Poland is expected to arrive in Ghana today, Friday.

Country on March 1, 2022, welcomed home the first group of students who were evacuated from Ukraine when Russia invaded the country.

Ghana’s Foreign Ministry puts the figure of Ghanaian students in Ukraine who have fled the country and wish to return home at more than 500.

The Deputy Minister for Foreign Affairs and Regional Integration, Kwaku Ampratwum-Sarpong, has touted the government’s role in airlifting the students into the country.

According to the Minister, Ghana is the first country to have successfully evacuated some citizens in the midst of the ongoing turmoil in Ukraine.

“The government is determined to make sure that your colleagues who want to be evacuated are evacuated. Information coming in is that Ghana is the first country that has evacuated her compatriots. Ghana is doing its best to encourage Russia to stop the attack and atrocities on the citizens of Ukraine,” he told the evacuees.

Its President, Vladimir Putin, announced the military operation at dawn despite calls for de-escalation from world leaders.

There have been reports of explosions near major Ukrainian cities, including its capital, Kyiv.

Recent tensions have stemmed from Russia’s opposition to Ukraine’s moves towards European institutions like Nato and the EU.