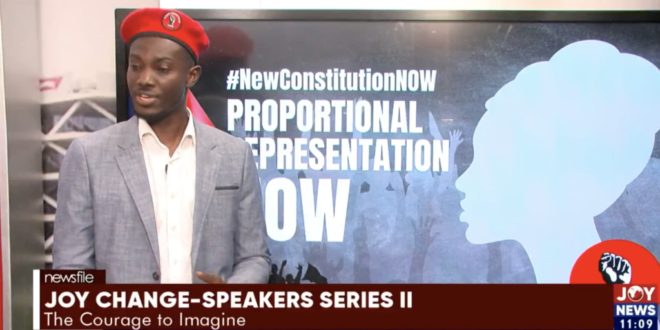 A pressure group, the Economic Fighters League (EFL) says it will deal rootlessly with corruption should they be elected to govern the country.

According to the group, dealing with corruption is one of its topmost plans. This is because it wanes the resources of the state, which otherwise could be used to better the country.

The Commander-in-Chief of the group, Ernesto Yeboah contributing to Joy Change-Speakers Series II on Saturday, May 21, said the country has failed to deal with the canker because it is focused on individuals.

“You take the idea of fighting corruption We talk a lot about that we will do this, and we will do that but more often than not, they are not practical because the idea only suggests that we are going to deal with the individual, but corruption has social implications.”

With this, Mr Yeboah said the pressure group will introduce a “thief tax” to make the corruption canker unattractive.

We’ll introduce ‘thief tax’ to deal with corruption when elected into office – Economic Fighters’ League
Ernesto Yeboah
He explained that, with this policy, persons found to have misconducted themselves, will not be imprisoned.

However, he said the “criminals” will be made to live in their respective societies and face the shame it comes with while refunding whatever he or she is found to have stolen.

Ernesto Yeboah added that even religious bodies associated with such persons will also be affected.

“So if it has social implications and an African etymology suggests to us that when a man or woman misconduct himself or herself, the shame does not come to the person alone, but it comes to the family. So where do we find this line of a streak of social philosophy in the African, certain in our laws? So one of the things that the Economic Fighters League will do will be to impose what we call the thief tax.”

“Where when a man is said to have stolen from us, we don’t waste our time by accommodating that person in prison and feeding that person and catering for the medical bills of that person but what we seek to do is to let that person live within the society and face the social shame thereof, and it is not only him going to repay our monies to us, but we will also impose it on the family members and the beneficiaries including the churches they attend or the mosque or religious certain that they may find themselves in.”

The group is already putting measures in place to form a broad coalition that will challenge the NDC and NPP in the 2024 elections.

They insist that a radical Nkrumahist movement focused on economic independence.

The NPP and the NDC have dominated Ghana’s political landscape since the return to constitutional rule in 1992.

The two parties have alternated between government and opposition in what has become a de facto two-party system.

However, many have decried the lack of development, invasive corruption, lack of accountability, and increase in inequality despite the fat resources of the state, blaming these on the two parties.

The desire to see an alternative to the two main parties has been consistently dashed as smaller parties are unable to garner even 1% of the votes in previous elections.

This in itself has led to what some have called ‘politics of exclusion’, which they say is a threat to Ghana’s democracy. The Economic Fighters League seems to be readying to provide the alternative Ghanaians have been yearning for.

I'm Adwenpa-Hene |Blogger & Broadcaster Journalist. I am the CEO and manager of this noble website. I publish on Entertainment, Sports, Politics, Lifestyle, and Technology. You can also follow Us on : YouTube Channel - My Ghana Media TV, Facebook - MyghanaMedia TV , Twitter - @MyGhanamedia2 & Instagram - My Ghana Media TV. Email Address: [email protected] Contact Us: 0200818719
@@MyGhanamedia2
Previous Tension Simmers At UEW As Governing Council Chairman Directs Registrar To Proceed On Leave
Next Public Health Expert Warns Ghana To Scale Up Surveillance Against Monkeypox