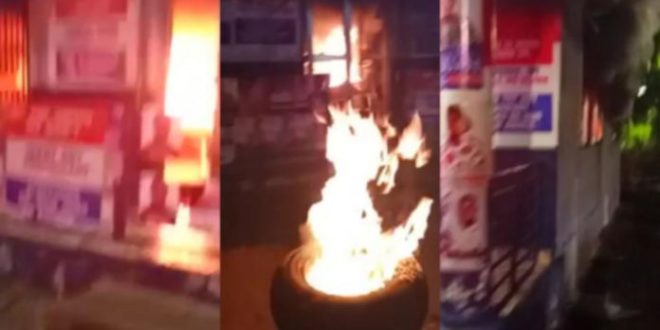 Some disgruntled supporters of the governing New Patriotic Party (NPP) in the Aowin Constituency of the Western North Region, have set the party’s constituency office on fire over a decision by the National Council to re-run the constituency’s election.

The National Council said the elections were fraught with irregularities and must be conducted again.

However, some supporters in the constituency unhappy with the directive, are completely against it.

They have vowed to resist every attempt to have the elections rerun.

The aggrieved persons said, “we will not agree. We will not hold another election. We’ve already voted and the women’s orgnanizer has been removed. Let it stay so. We’ve voted out the person and you want us to vote again because of that?”

A press conference organized by the aggrieved party supporters blamed John Boadu, General Secretary of the party for the development.

According to the them, the committee did not recommend a rerun of the elections but that input was made by John Boadu.

Read their statement below:

Ladies and Gentlemen of the Press, kindly accept our warmest regards for attending to our call this crucial moment. Our message to John Boadu and the leadership of the New Patriotic Party is very simple. We will not sit down for John Boadu to destroy the party here in Aowin. About a month ago, the Constituency Elections Committee organized very credible elections after weeks of rigorous campaign, going to electoral areas that are one hundred miles apart all within the very large Aowin Constituency.

The Elections were conducted by the Electoral Commission of Ghana, candidates were voted for by the almost nine hundred delegates and eventually, elections results were declared. Today, we are hearing John Boadu is going to call for a rerun of the elections in positions where persons supported by his Personal Assistant, one Abanga lost terribly.

Ladies and Gentlemen, let me pause here and send the strongest signal to John Boadu and those involved in this grand scheme to note that, firstly, WE WONT ACCEPT ANY RE-RUN of the Constituency elections. Secondly, we shall use EVERY MEANS POSSIBLE TO RESIST any attempts of nullification of any of the positions unless the Electoral Commission which conducted the elections has said so or a competent court of jurisdiction

Now back to the lies of John Boadu and his cronies, Ladies and Gentlemen I have a copy of the comprehensive report from the Aowin Constituency Elections Committee. The Committee’s report details all the legitimate processes that were followed and provides concrete ground for every single action taken. Kindly go through the report and know for yourselves the kind of competent and detailed work the committee did only for John Boadu and a few people in Accra to think they twist things and have their way. No! We shall resist them to the peril of our lives because we have suffered enough to build the party here.

Our message is simple, they should not put our patience and resolve to test. They will be in for the shocks of their lives if they think we are far from the headquarters of the party. We will literally wipe out NPP from this Constituency for everyone to see if they think they nullify and an election conducted by the Electoral Commission of Ghana without recourse to the courts of competent Jurisdiction in this country.

We will rest our case here and wait for them.

Meanwhile, another youth group in the constituency is calling for a swift organization of the re-run election.

In a statement issued last week, they accused the Regional Chairman, Mr. William Benjamin Assuah and the National Director of Research and Elections, Mr. Evans Nimako of deliberately working to frustrate the process to carryout the recommendation of the committee put together to look into the issue.

See also  Afenyo-Markin To NABCo Personnel: Be Patient; You Will Be Paid

Good afternoon Ladies and gentlemen of the Media. We thank you very much for honouring our invitation for such an important press conference, though it was with a short notice.

As you may recall, our Constituency elections was scheduled on 30th April, 2022.

A petition was sent to the national Executive Committee through our general Secretary and it was referred to the Alternative Dispute Resolution and Legal Committee.

Ladies and gentlemen of the Media, our National council met on Friday, 13th May, 2022 and received the report from the Alternative Dispute Resolution and Legal Support Committe Chaired by Hon.Cecilia Dapaah on the unconstitutional disqualification of aspirants in our Constituency, that’s AOWIN.

The National council which received the report and read at the meeting concluded as captured in the report a re-run of the affected positions in our Constituency.

Friends, it will interest you to know that, today we were briefed that, the Regional Chairman, Mr William Benjamin Assuah and our National Director of Research and Elections, Mr Evans Nimako want to connived and employed clandestine tactics to delay the execution of the decision taken by National Council and eventually imposing the other candidates whose elections have been nullified on us.

We are also aware that the Regional Chairman wants to use delay tactics to disenfranchise the affected positions in our Constituency and their appointees in the impending Regional Elections, so he has sent a petition to the Director of Research and Elections requesting his side to be heard in the decision taken by the Alternative Dispute Resolution and Legal Committe and approved by National Council. How on Earth should this petition be allow to thrive and even receive attention?

What is it there to be heard again, after decision taken by National Council?

Hon Evans Nimako, the Director of Research and Elections, agreeing to meet the affected aspirants and the regional Chairman in the spirit of giving the Regional Chairman hearing on the events is believed to be delaying the process.