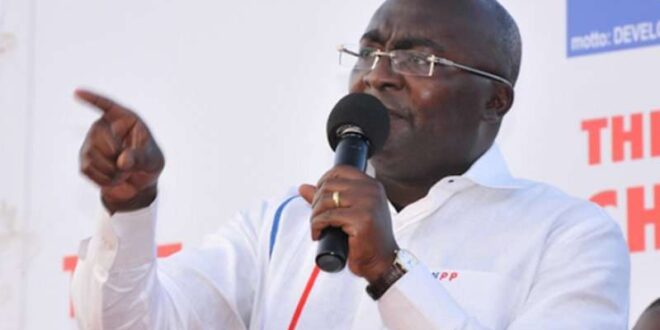 The Vice President of Ghana, Dr. Mahamudu Bawumia, has extended warm congratulations to all candidates who participated in the Regional Executive Elections which were held over the weekend.

The Vice President, in a tweet, said he is impressed with the “impressive show of intra-Party democracy so far exhibited by the New Patriotic Party (NPP) in the conduct of elections from the polling stations to the regional level.

“Congratulations to all competing parties,” he said in the tweet.

He, however, urged members of the party to be more poised, now than ever, to forge unity for a stronger Party.

“Even though the contestants may have been on opposing sides, let us all remember that we are one family, the Kukrudu family. Once again, ayekoo to all party faithful for this success,” he said.

The Bono East NPP Regional Chairman, Thomas Adu-Appiah is among the candidates who lost their seats.

Ibrahim Baba Bukari won the bid with a landslide victory after polling 151 out of 237 valid votes cast.

See also  Mahama Bids Farewell To Tsutomu Himeno of Japan: Thank You For Your Services

In the Northern Region also, six executives retained their seats.

Meanwhile, General Secretary of the party, John Boadu has announced that a letter will soon be issued to officially inform party members that nominations are open for candidates who want to contest at the national level to do so.

I'm Adwenpa-Hene |Blogger & Broadcaster Journalist. I am the CEO and manager of this noble website. I publish on Entertainment, Sports, Politics, Lifestyle, and Technology. You can also follow Us on : YouTube Channel - My Ghana Media TV, Facebook - MyghanaMedia TV , Twitter - @MyGhanamedia2 & Instagram - My Ghana Media TV. Email Address: [email protected] Contact Us: 0200818719
@@MyGhanamedia2
Previous ‘I Paid Each Delegate Gh¢1,000 But Still Lost – Defeated NPP Chairman Aspirant
Next Gov’t Gives Over 400 Acres Of Military, Other State Land To Asantehene