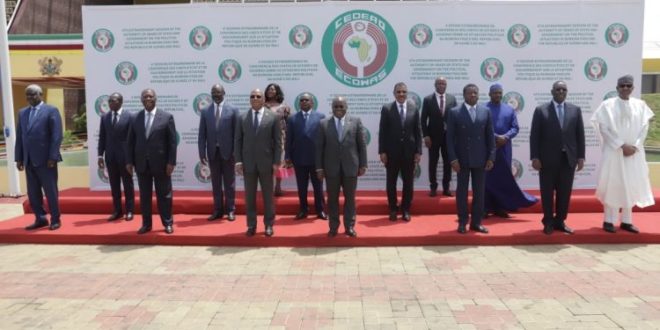 The leadership of the Economic Community of West Africa met in Accra on Saturday to find a lasting solution to the political situation in Guinea, Mali, and Burkina Faso.

At the meeting which was the sixth extraordinary meeting of the Authority of Heads of State and government on the political situation in the said countries, the issue of delays in the transition process dominated discussions at the table.

On the security front, the Authority took note of the efforts made by Burkina Faso, despite its numerous challenges, in recovering some localities, thus leading to the return of some of the Internally Displaced Persons (IDPs) and the reopening of some schools.

In this regard, the Authority encouraged the Transition Authorities to sustain the momentum towards further enhancing security in the country.

On the humanitarian front, the Authority expressed serious concern about the deteriorating humanitarian situation compared to the situation noted by the previous ECOWAS mission in the country in April 2022.

It, therefore, called on the international community to strengthen its humanitarian support to the country.

It welcomed the decision to allow former President Kaboré to return to his home and insisted that he be given full freedom.

The Authority however reiterated its concern about the duration of the transition period set at 36 months by the Burkinabé Authorities as stated in its Communiqué issued on 25 March 2022.

Consequently, and following the decision of the Extraordinary Summit held on 3 February 2022, the Authority however reiterated its strong condemnation of the coup d’Etat of 24 January 2022, and decided to uphold the suspension of Burkina Faso from all ECOWAS institutions until constitutional order is restored.

It has also demanded the finalisation of an acceptable transition timetable and taken note of the correspondence of 31 May 2022, from the Transition Authorities who stated their willingness and commitment to continue dialogue with ECOWAS to ensure a return to constitutional order as soon as possible.

They have also decided in line with this commitment, to continue the discussions with the authorities on the transition to reach an agreement and examine the situation in Burkina Faso at its next Ordinary Summit on July 3, 2022.

They have since appointed Mahamadou ISSOUFOU, the former President of Niger, as ECOWAS Mediator for Burkina Faso, to facilitate dialogue among all stakeholders.

The Authority again expressed serious concern over the deteriorating socio-political situation notably due to the lack of an appropriate dialogue framework between the government and the political stakeholders and civil society actors.

They, however, also expressed reservations about the length of the 36-month transition period announced by the transition authorities.

Consequently, they are asking for the finalisation of an acceptable transition timetable whilst urging the government to establish an appropriate framework for dialogue with political and civil society stakeholders to ease the socio-political tension and ensure a peaceful transition.

The Authority has also recommended the continuation of the discussions on these two items and confirmed the designation of Dr. Mohamed Ibn Chambas as ECOWAS Mediator in Guinea.

citizens and to desist from any arbitrary act that undermines the rule of law in Guinea and resolved to examine the situation in Guinea at its next Ordinary Summit on July 3, 2022.

In the case of Mali, they commended the efforts made by the ECOWAS Mediator to reach an acceptable timetable to ensure a quick return to constitutional order, following the ECOWAS and African Union protocols and decisions.

They have since asked the Mediator to Mali to continue his efforts and to finalise the discussions with the Transition Authorities and decided to uphold the sanctions imposed on 9th January 2022.
They have called for continuous dialogue to reach an agreement to ensure a gradual lifting of the sanctions as benchmarks of the transition is met whilst asking partners to increase their humanitarian support to Mali.
The Authority has again resolved to examine the situation in Mali at its next Ordinary Summit on July 3, 2022.