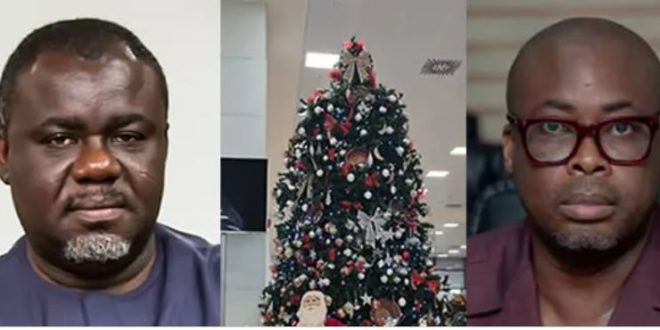 The Ministry of Transport has stated that “there was no procurement nor bidding process for the award of contract” in the controversial Christmas tree and decorations by the Ghana Airports Company Limited (GACL).

This revelation by the ministry contradicts the claim by the board chairman of the GACL, Paul Adom-Otchere, that “two separate suppliers were invited to submit bids. The bids were discussed and discounts obtained.”

The Ministry also said the 2021 “Christmas decorations in question were rented” and not bought as was previously claimed by the GACL board chairman.

The Ministry of Transport’s revelations are contained in a response to a right to information (RTI) request filed to GACL by Redeemer Buatsi in January 2021 and sighted by The Fourth Estate.

Redeemer Buatsi, a fellow of the New Generation Investigative Journalism Fellowship of the Media Foundation for West Africa, asked questions about how the services of the two companies were procured for the controversial Christmas decoration at the Kotoka International Airport.

He filed the request because of what to him were inconsistencies in the response given by Paul Adom-Otchere when the airport Christmas tree saga popped up early this year.

When news emerged that the GACL had bought Christmas trees and decorations at over GHS 128,000, the board chairman of the company responded to the allegations in hours.

The news of the procurement emerged with leaked proforma invoices from two companies from which the services were procured. The two invoices were addressed to the GACL, with one of them naming the board chairman, Paul Adom-Otchere.

A proforma invoice from Jandel Limited for “Terminal 3 Arrival Hall (a decorated Christmas tree with lights), lighting décor on the trees around the lawn, and decoration of existing trees” amounted to a total of GHS 38,775.

Another proforma invoice from Favors and Arts for the rental of a Christmas chandelier with lights amounted to GHS 90,500.

The proforma invoice from Favors and Arts was addressed to the GACL and “Mr Paul Adom-Otchere”.

Social media commentators questioned the corporate governance structures at the GACL that allowed the board chairman of the state-owned company to be directly involved in the procurement of Christmas decorations.

On January 7, 2022, Paul Adom-Otchere sidestepped the corporate affairs department of the company and issued a statement to clarify the widely circulating information that suggested imprudent use of public funds by the company.

“Dear folks, my attention has been drawn to a social media post (herein attached) grossly misrepresenting facts about Christmas inspirations that were mounted at the Kotoka International Airport,” Paul Adom-Otchere wrote on his Facebook wall.

In what he called “Facts”, Mr Adom-Otchere explained in a bulleted release that the GACL paid GHS 118,000 for the decorations, out of which GHS50,000 was paid by a sponsor.

The statement went on:

“FACT: Two separate suppliers were invited to submit bids. The bids were discussed and discounts obtained. (We are grateful to Jandel Limited and Favors and Arts).

FACT: The beautiful Christmas tree standing at Terminal 3 and 3 others altogether cost GHC 34,000, which was graciously provided by Jandel Limited at a heavy discount. (We thank Jandel Limited).

“FACT: The other inspirations were provided by Favors and Arts for a total cost of GHS 84,000 out of which GHC 50,000 was obtained via sponsorship.”

On January 11, four days after his social media release, Mr Adom-Otchere, who’s also the host of the Good Evening Ghana programme on Metro TV, followed his statement up with an explanation on his TV show.

“We put out a statement that the Christmas tree was bought for 34,000 cedis,” Mr Adom-Otchere emphasised how much the GACL paid for the tree while referring to an invoice on a touch screen monitor in the studio.

However, what changed in the TV presentation was how much the company paid for the decorations. Instead of the GHS118,000 he earlier stated as the total payment, he revised the figure to GHS 128,366.

The contradictions in the two explanations by Paul Adom-Otchere, coupled with the viral claims, provoked Redeemer to file an RTI request for clarification.

Alleged breach of the procurement law

Some critics of the deal alleged that the GACL had breached the Public Procurement Act in the application of the request for quotation method.

According to Paul Adom-Otchere, the GACL requested quotations from two companies to provide the different services for the Christmas decorations at the airport.

Article 42 of the Public Procurement Act states that a “procurement entity may engage in procurement by requesting quotations in accordance with section 43.”

Section 43 of the Act says, “The procurement entity shall request for quotations from as many suppliers or contractors as practicable, but shall compare quotations from at least three different sources that should not be related in terms of ownership, shareholding or directorship and the principles of conflict of interest shall apply between the procurement entities and their members and different price quotation sources.”

What this means is that the GACL should have requested quotations from at least three service providers for the Christmas tree and another three quotations for the rental of the chandelier.

However, the GACL requested one quotation each for the two services, a practice some critics said fell foul of the procurement law.

The RTI request in January and the response in June

In January, Redeemer Buatsi requested copies of the procurement contract and how much the GACL spent on Christmas trees over the years among other pieces of information.

The GACL refused to respond to the request. Mr Buatsi followed with an internal appeal to the managing director of the company, in accordance with the RTI law.

In a response dated April 4, 2022, about three months after the initial request, the GACL, in a letter signed by its managing director, Mrs Pamela Djamson-Tettey,  referred the journalist to the Ministry of Transport.

“Please be advised that the information you seek has been submitted to the Ministry of Transportation per our letter dated 10th March 2022, in response to a parliamentary question filed by Hon. Kwame Governs Agbodza, MP.

“We therefore request that you contact the Ministry of Transport for the information in line with Article 21 of the Right to Information Act, 2019 (Act 989),” the GACL stated in the letter.

Redeemer transferred the request to the Transport Ministry.

In a letter dated June 10 and signed by Theresah Kokui Fiador, for the Minister, the Transport Ministry denied both the January 7 and January 11 claims of Paul Adom-Otchere, on the procurement of the Christmas decorations.

“Please be informed that the Christmas decorations for 2021 was rented and not procured for by the GACL. Hence there was no procurement nor bidding process for the award of contract,” the Ministry of Transport said.

The Ministry also said even the rented decorations were paid for by a sponsor, implying that the GACL incurred no cost on the 2021 Christmas decorations.

“For emphasis, we wish to reiterate that the Christmas decorations in question were rented and paid for by a sponsor. Therefore, no contract was awarded by GACL for the purpose,” the Ministry said.

While Paul Adom-Otchere in his January 7 release stated that “Two separate suppliers were invited to submit bids and that the “bids were discussed and discounts obtained”, the Transport Ministry said in its letter “there was no procurement nor bidding process for the award of contract”.

Also, while Paul Adom-Otchere stated that GACL “bought” and paid for Christmas tree and inspirations, the Ministry said the decorations were “rented” and not bought.