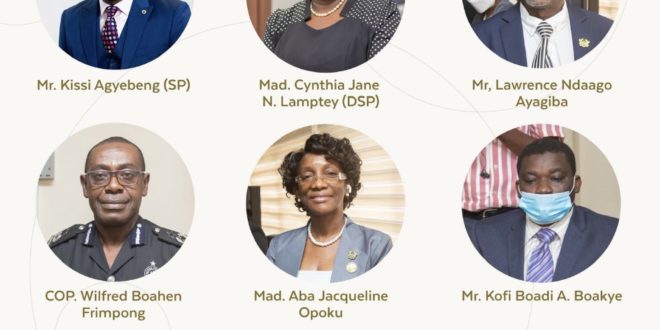 Office Of The Special Prosecutor Gets New Governing Board

The Office of the Special Prosecutor (OSP) finally gets a governing board after the tenure of the first board expired in June 2021.

This means the OSP’s office is now well-constituted to perform all its functions under the law, including the recruitment of the requisite for the execution of its mandate of investigating and prosecuting suspected corruption and corruption-related offences.

The Special Prosecutor has had reason to complain how the delay in constituting the board has stalled his work, especially with respect to the recruitment of staff which the board must advise.

Pressure was brought to bare from many quarters including Civil society.

Since Kissi Agyebeng was sworn into office nine months ago, the OSP has been without a Board.

The absence of the Board members has been a thorny issue for many civil society organisations who have lamented the lack of a substantive Board and the impact on the operations of the Special Prosecutor.

The Attorney-General and Minister for Justice, Godfred Yeboah Dame, on Tuesday 21st June 2022, inaugurated the second Governing body of the Office of the Special Prosecutor (OSP) in accordance with section 5 of the OSP Act (Act 959). pic.twitter.com/HSppVdsGjA

Section 6(2) of Act 959 provides that the Board shall not interfere in the day to day functions of the Office.

Members of the board are representatives from the Ghana Police Service, the Audit Service, EOCO, CHRAJ, FIC, National Security and a female from the CSOs

I'm Adwenpa-Hene |Blogger & Broadcaster Journalist. I am the CEO and manager of this noble website. I publish on Entertainment, Sports, Politics, Lifestyle, and Technology. You can also follow Us on : YouTube Channel - My Ghana Media TV, Facebook - MyghanaMedia TV , Twitter - @MyGhanamedia2 & Instagram - My Ghana Media TV. Email Address: [email protected] Contact Us: 0200818719
@@MyGhanamedia2
Previous Youth Cautions Against Attempt To Create New Seal For Osu
Next Judges In Ghana Deny Being Paid Ex Gratia