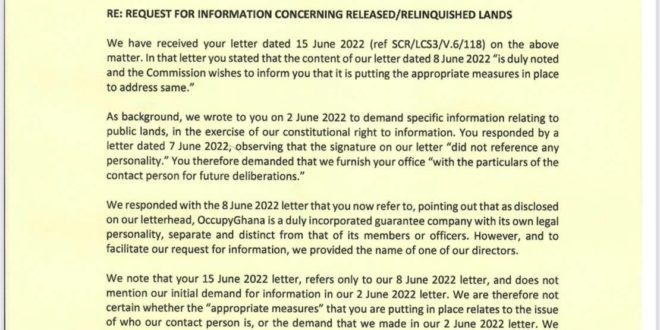 Civil Society Group, OccupyGhana has requested full details of disallowance and surcharge certificates issued by the Auditor-General in respect of infractions committed by officials of public service institutions.

The group in a letter dated June 21 addressed to the Auditor-General questioned why disallowances and surcharges have not been issued since 2018. OccupyGhana stated, “That as you know is a gross violation of your mandatory constitutional injunction to disallow and surcharge whenever you come across an infraction.

“What also beggars belief, is your information to us that after you have issued your reports in which you state firmly that you have found infractions (and even give amounts lost because of them), you are now looking for evidence, which you already have or should have had before issuing your reports that disclose the infractions and the amounts lost to the state through them.”

“We are therefore compelled to question the bases on which you announced those infractions and amounts lost, if you had no evidentiary basis, and so have to “collect evidence” on the same infractions, years after you have issued your reports,” the pressure group added.

OccupyGhana noted that “It is this unacceptable mode of performing your constitutional duties that compelled the Supreme Court in OCCUPYGHANA v ATTORNEY-GENERAL to make your disallowance and surcharge mandatory upon discovering any such infractions.”

“You, sir, have chosen to delay the disallowance and surcharge until after you have issued your report. The effect is that you have simply not done your work in the manner demanded by the Constitution and the Supreme Court,” portions of the rejoinder noted.

According to them “What is worse, you are now going to issue intentions to disallow and surcharge, after your reports have already put the persons allegedly involved in the infractions on notice, followed by years of inaction while your committee now gathers evidence that you already have and which must have informed your reports.

“What you have succeeded in doing is affording people the opportunity to cover their tracks and cause even the initial evidence to disappear. You have to explain to Ghanaians what would happen if after reporting infractions, your committee does not find the evidence that allegedly formed the basis of your conclusions on infractions in your reports,” the group noted.