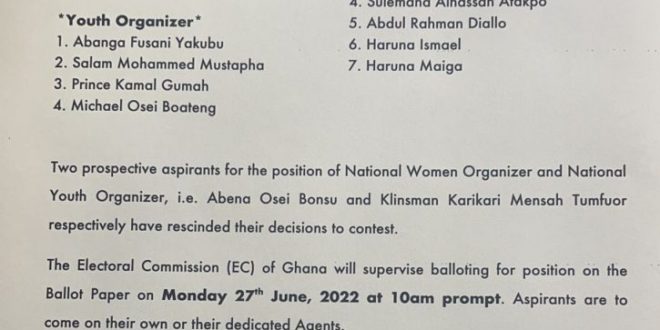 NPP Releases List Of Qualified Aspirants To Contest For The Various Positions.

The National Elections Committee in charge of the vetting of aspiring national officers for the ruling New Patriotic Party (NPP) has cleared 48 aspirants to contest for the various positions.

However, the committee led by Peter Mac Manu according to sources disqualified three of the aspirants, who have the chance to appeal against their disqualification. The appeal process may give them a window of opportunity to take part in the next month conference to elect the national officers.

The committee ended the vetting of applicants for various positions in the party’s upcoming National Conference to be held on July 15 to July 17, 2022 at the Accra Sports Stadium.

Qualified aspirants who successfully went through the party’s vetting process were contacted by the party through text messages.

The vetting report was supposed to have been released to the public Wednesday but party sources said the aspirants have to be informed before making it public.
According to sources the unsuccessful applicants were to meet the chairman of the Election Committee, Peter Mac Manu today, Thursday, June 23, 2022 to communicate the vetting decision to them.

The process begun with vetting of first batch of aspirants on June 17, 2022 at the party headquarters in Accra which saw applicants for National Women’s Organiser, National Youth Organiser and National Nasara Coordinator positions who were vetted.

Vetting of aspirants for the National Organiser and Treasurer positions took their turn on June 18, 2022, whiles those vying for the chairmanship position faced the panel on Monday June 19, 2022. 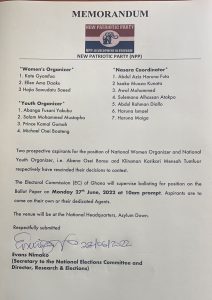 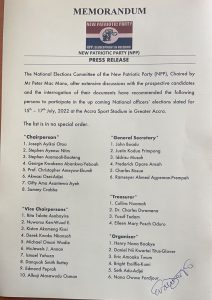 I'm Adwenpa-Hene |Blogger & Broadcaster Journalist. I am the CEO and manager of this noble website. I publish on Entertainment, Sports, Politics, Lifestyle, and Technology. You can also follow Us on : YouTube Channel - My Ghana Media TV, Facebook - MyghanaMedia TV , Twitter - @MyGhanamedia2 & Instagram - My Ghana Media TV. Email Address: [email protected] Contact Us: 0200818719
@@MyGhanamedia2
Previous About 1,000 Students In Kyebi Receive Ghc20 Each As A Gift From Okyenhene (Video)
Next Napo Resolutely Committed To Revamping Tema Oil Refinery – Ministry of Energy