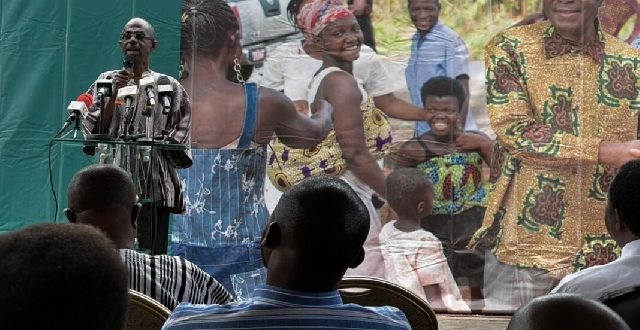 The General Secretary of the opposition National Democratic Congress  , Johnson Asiedu Nketiah has proclaimed the Ahotor business project (a private initiative of Dr. Kwabena Duffuor, former Minister for Finance and leading NDC member) as a project that is first in history for any political party in Ghana.

The General Secretary also known as General Mosquito was speaking during a party occasion to officially endorse and launch the Ahotor Project at the NDC Headquarters in Adabraka, Accra on Thursday.

He said he was not surprised it was Dr. Kwabena Duffuor who initiated the historic NDC Ahotor project because he was the same Finance Minister who turned Ghana’s economy around.

“This project is the first of its kind since our party was established. We have been engaging with the donor and we want to collaborate with Dr. Duffuor to structure the project very well in accordance with the party’s principles, procedures and laws. This is what caused the delay in officially endorsing the project’’.

Asiedu Nketiah also reiterated the importance of donations, dues, and contributions to the continual running of the opposition party and encouraged party members and the general public to emulate the example of Kwabena Duffuor as the party prepares to wrestle power in 2024 from the ruling NPP government.

‘’We survive on dues, contributions and donations from members of the public and our own members. We have been receiving donations from former appointees of the party. We’re proud to say that the donor of the Ahotor project, Dr. Kwabena Duffuor, is a former appointee of the NDC government who worked as governor of the bank of Ghana and a finance minister who turned things around between 2009-2012’’.

He further praised the Ahotor project as a sustainable one which will not only earn income for the party, but will also save the party lots of money as the party will no longer have to rent a PA system, chairs and canopies for its own outdoor programs.

‘’This money could have been used in buying consumables, like the NPP were distributing frozen chicken parts in the last elections’’. The general secretary continued, ‘’This Ahotor project is intended to build the capacity of the party structure to run effectively. It is not going to provide anybody pocket money. It is a contribution that will support the party itself to grow, to develop its own capacity to finance its activities and I think that in that sense it is a very commendable project’’.

I'm Adwenpa-Hene |Blogger & Broadcaster Journalist. I am the CEO and manager of this noble website. I publish on Entertainment, Sports, Politics, Lifestyle, and Technology. You can also follow Us on : YouTube Channel - My Ghana Media TV, Facebook - MyghanaMedia TV , Twitter - @MyGhanamedia2 & Instagram - My Ghana Media TV. Email Address: [email protected] Contact Us: 0200818719
@@MyGhanamedia2
Previous Tema Oil Refinery To Begin Refining As Government Seals Deal For Crude Oil
Next Tiger Storms Sunyani As Residents Lockdown, Eats Only Intestines Of Its Prey.