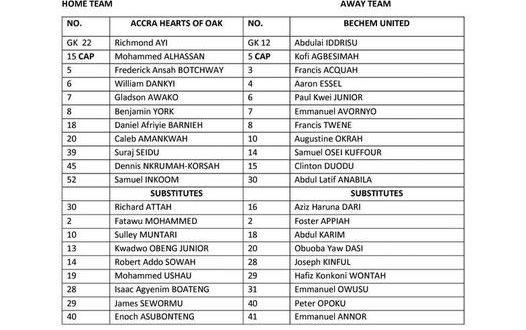 Accra Hearts of Oak head coach Samuel Boadu has announced his starting line up for their all-important FA Cup final game against Bechem United this evening.

The Phobians are battling out with Bechem United for the 2021/22 FA Cup final match scheduled to be played at the Baba Yara Sports Stadium on Sunday evening.

Trio Seidu Suraj, Benjamin Yorke and Daniel Afriyie Barnieh have been handed starting berth to lead the upfront for Hearts of Oak with Gladson Awako and Frederick Ansah Botchway in the middle.

Below is Hearts of Oak line up against Bechem United

Below is Bechem United  line up against Hearts of Oak

I'm Adwenpa-Hene |Blogger & Broadcaster Journalist. I am the CEO and manager of this noble website. I publish on Entertainment, Sports, Politics, Lifestyle, and Technology. You can also follow Us on : YouTube Channel - My Ghana Media TV, Facebook - MyghanaMedia TV , Twitter - @MyGhanamedia2 & Instagram - My Ghana Media TV. Email Address: [email protected] Contact Us: 0200818719
@@MyGhanamedia2
Previous Presidency To North Tongu MP: Akufo-Addo’s Travels Have Benefits, What About Yours?
Next GFA : The 8 Rules Ghanaian Clubs Must Obey Before Registering Players For 2022/23 Season