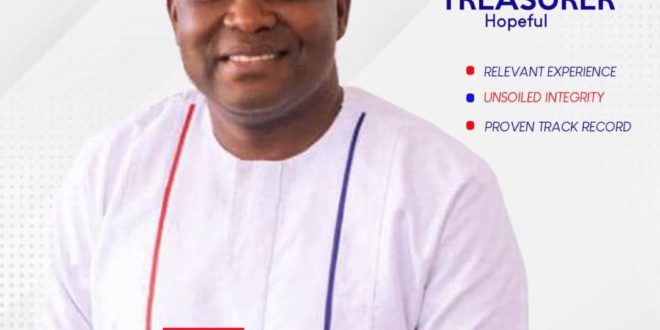 Delegates of the New Patriotic Party (NPP) in the Northern Region have thrown their weights behind the former Deputy Ambassador of Ghana to China and a former Director of Finance and Administration at the Party’s Headquarters,  Dr Charles Dwamena, in his bid to become the party’s National Treasurer.

According to them, Dr Dwamena has what it takes to increase the fortunes of the party, and help it retain power in the 2024 general election.

The delegates, including regional executives of all five regions of the north made this known during Dr Dwamena’s regional campaign tour of the Upper West region.

In an interaction between the candidates and the delegates, Upper West Regional Minister, Dr Hafiz Bin Salih disclosed that all regional executives have resolved to vote en bloc for Dr Dwamena, popularly known as ‘Dr China’.

“When we invest our trust in someone we don’t retreat that trust. We have come a long way with you. We know our monies are safe with you because of your past record so we have decided to give you the maximum support.

And when you succeed, please don’t betray the trust and confidence we have placed in you. By the grace of Almighty Allah, when you become the next National Treasurer, handle our resources very well and as the overlord of the region you have my blessings”, he said after a brief ceremony.

During his recent regional campaign tour of the Upper Western region, Dr Dwmena, who is also the former Deputy Ambassador to China was enstooled as Zinpehi Naa (to wit the ‘Comforter Chief’).

According to the delegates, the title was an indication of the confidence the grassroot of the party repose in him.

The delegates also reiterated their belief in the fact that if given the nod, Dr Dwamena will work assiduously to empower the party financially.

Dr. Dwamena is part of 48 aspirants who have been cleared by the party to contest in the NPP upcoming National Delegates Conference in July.

Meanwhile, delegates of the New Patriotic Party (NPP) in six other regions of the country have also endorsed Dr Charles Dwamena, after listening to his vision for the party.

The delegates have, therefore, promised to vote for him to become the next National Treasurer of the NPP when the party goes to the polls from Friday, July 15 to Sunday, July 17, 2022, to elect its national officers who will steer the affairs of the party for the next four years.

The challenging task ahead of these national officers is breaking the eight year jinx.

However, the delegates cautioned him not to turn his back on them since they claimed that majority of the party’s faithful have been neglected and left to wallop in abject poverty.

The former Director of Finance and Administration at the party’s headquarters, on June 8, 2022, scaled up his campaign by picking up nomination forms to contest for the position of National Treasurer of the party.

A day after, he hit the grounds running by first interacting with delegates in the Central Region and thereafter, proceeding to Western, Western North, Ahafo, Bono, and Bono East Regions.

The move was part of phase 1 of his nationwide campaign tour for the National Treasurer position of the NPP.

In all the regions he visited, he interacted with the delegates by first espousing his vision for the position he is seeking for. For instance, he spoke about digitizing the party’s treasury to ensure that every member benefits from the coffers of the party.

‘Dr. China’ also spoke about some other policy proposals, including his 2-pillar and 10-step policy that he will be seeking to implement when given the nod to manage the party’s treasury.

See also  Will The NDC Ever Be Honest With Ghanaians? - NPP Director of Communications Quizzes

He mentioned in particular, effective resource mobilization and efficient resource utilization where all party members will be beneficiaries

According to him, the NPP through its resource mobilization drive could raise millions of Ghana Cedis every year, especially, through membership dues.

“I want to assure you that with your support, we could work to turn things around. It will never be business as usual. Your concerns are my priority and a vote for me will ensure that those concerns are addressed”, he noted.

Some of the delegates also shared their concern with the National Treasurer hopeful of the NPP. Key amongst them included the sheer neglect of the grassroots base of the party; the majority of whom suffer to death while few enjoy when the party is in power.