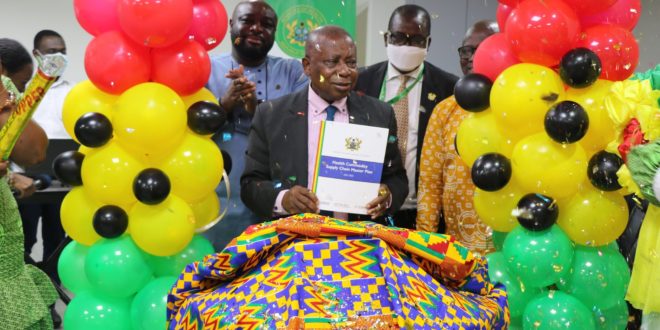 The Health Minister and Member of Parliament (MP) for Dormaa Central , Kwaku Agyeman-Manu, on Tuesday submitted more than 10 pieces of evidence against former Deputy Finance Minister, Dr Cassiel Ato Forson, and two others.

This is with regards to the case in which Dr Forson and two other people are being accused of causing financial loss to the state in the procurement of ambulances.

Mr Agyeman-Manu is the fourth of the Attorney General’s five witnesses to be relied upon in the case.

The Attorney General, Godfred Yeboah Dame, led the Minister of Health to give evidence to the court.

Mr Agyeman-Manu traced his knowledge of the scandal from his time as Chairman of the Health Committee for the then incoming government’s transition team.

He told the Court that he noticed some ambulances which had gone through various processes and were expected by the ministry, had still not been delivered.

“I was appointed as Chairman of the Transition Committee on Health after change over of government. During the transition deliberations, it came to my notice that ambulances were supposedly procured by the Ministry of Health but had not been delivered. Later after transition, I was appointed as substantive Minister of Health.

“My handing over notes indicated the lack of ambulances. So I became interested in the ambulances that had still not been delivered to the Ministry.”

Mr Agyeman-Manu then presented some documents to the Court to demonstrate what his search on the matter revealed.

These documents included a proposal from businessman Richard Dzakpa to the Health Ministry for the supply of 200 ambulances, a letter from cabinet to the then ministers of Health and Finance, indicating approval to obtain a loan facility of €15.8 million from Stanbic Bank Ghana.

Also submitted to the Court was a request from the two ministries for parliamentary approval.

Evidence of this parliamentary approval was also given with another letter from the Ministry of Health signed by another accused person, Seth Animana, to the Public Procurement Authority (PPA).

In the letter to the PPA, the Health Ministry was seeking an approval to single source the procurement of the 200 ambulances to a company by name Big Sea General Limited.

The PPA is said to have written to demand further details on the contract from the Ministry of Health. Mr. Manu said the Ministry responded that Big Sea was influential in government obtaining a loan from Stanbic Bank, hence the request.

However, Mr. Manu, insists there is no evidence backing the alleged role of Big Sea in obtaining the loan.

“The parliamentary approval was for the financing agreement and not any requirement of sole sourcing to Big Sea. What I can say is the fact that I have not sighted document of such nature at the Ministry alluding to this particular paragraph that was being used to justify the single source letter in favour of Big Sea General.

“What this paragraph is saying is that this company, referring to Big Sea General Trading, arranged funding for this project. Procuring 200 ambulances. There is no evidence that shows that the arrangement for the funding was done by Big Sea.”

Mr Agyeman-Manu then zoomed into the contract that was signed for the supply of the ambulances.

He explained that the contract signed had clear timelines which have since not been followed.

Mr Agyeman-Manu will continue with his evidence on Tuesday, July 5.