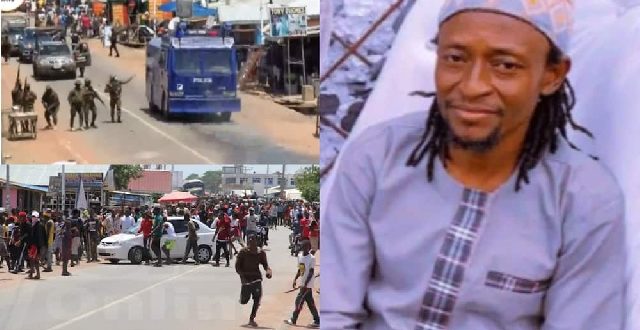 The Ejura District magistrate court has placed an interlocutory injunction on the celebration of first anniversary of Islamic prayers (Dua’a) for victims of the Ejura incident.

The event, scheduled to take place at Maame Dede Junction at Ejura in the Ashanti Region on June 30, has been restrained by the court for 10 days.

The restraining order was handed to the Joint Committee of Victims of the Ejura incidents on Tuesday, June 28.

A certified copy of the court order reads that, “upon reading the affidavit or DSP Emmanuel Kyei Sarpong of the Ghana Police Service, Ejura, the applicant herein, deposed to and filed on the 28th of June, 2022 in support of these Motion Ex-Parte for an order for interlocutory injunction.”

The spokesperson for the Kaaka Family, Nafiu Mohammed, says there is no established reason that necessitated the court placing an injunction on the event.

Nafiu told JoyNews’ Mahmud Mohammed-Nurudeen that a meeting between a joint committee of victims of the Ejura incidents and the municipal assembly was held concerning the event.

The Municipal Chief Executive, the Municipal Coordinating Director, the NADMO Coordinator for the District, the Nifahene, the Police Divisional Commander, the Ejura Police Station Crime Officer, Chairpersons of the NPP and NDC political parties, representatives of the Fire Service and the National Investigations Bureau were present at the meeting.

On Monday, a letter by the Chair of the Joint Committee of Victims of the Ejura incidents to the Municipal Chief Executive of Ejua-Sekyedumase expressed the Committee’s reservation to carry on with the anniversary.

“Our families, having decided that we are unable to cancel our event, which is the expression of our religious duty to our departed family members, deem it important to restate the context of our event and its history.

“It is our hope that such context will help your management to better appreciate the importance of the event to our families and that this would help you know how to support it better to come off successfully,” portions of the letter read.

The letter signed by Alhaji Inusah Mohammed Bawa said, “at the meeting, we reiterated our indication to confer with our family and revert. Despite this, your team told us that you were issuing an order to us to suspend our programming.

“We have also received phone calls from the Crime Officer of the Police and the Divisional Police Commander, which we consider to be unnecessarily raising tensions around our event.”

The letter, addressed to the Municipal Chief Executive, Dr Kingsley Osei, raised concerns about acts of intimidation against the Committee.

“We also note that several Zongo chiefs have been dissuaded from attending our event. We cannot fathom why state institutions and individuals who must be interested in helping us organise a successful event have taken the route of intimidation, ethnic bigotry and stoking ethnic tensions in our community only because we took a decision to commemorate the loss of our family members.

See also  We Are Struggling; Cushion Us – Public Sector Workers To Gov't

The Committee said the actions by the Police and the Municipal Chief Executive “are undermining faith in your credibility, impartiality and resolve to uphold the rule of law.”