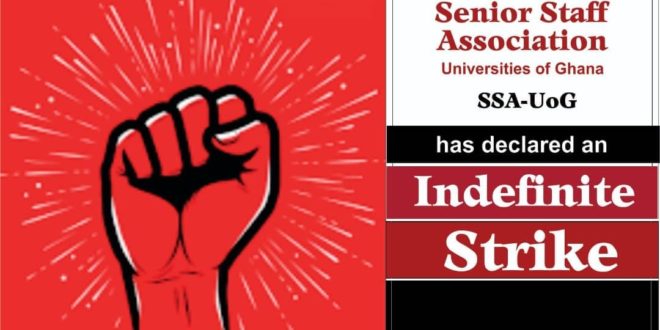 Members of the Senior Staff Association of the Universities of Ghana (SSA UOG) have declared a strike today.

At a news conference at the main entrance of the University of Ghana, members of the Senior Staff Association of the Universities of Ghana were asked by their leadership to “go home.”

The Association joins a tall list of public sector labour unions that have embarked on strikes demanding Cost of Living Allowance (COLA), calculated as 20% of basic salary.

They are also unhappy that accrued interest on Tier 2 pension arrears has not been paid.

The members are also worried about what they describe as university salary disparities.

At the news conference today, General Secretary of the Association, Hector Owoahene-Acheampong, said senior staff in the public universities are unfairly treated, and the time is now to have their demands met.

The two associations have accused the government of betrayal of trust for asking them to call off their strike before negotiations.

The Members of the Senior Staff Association of the Universities of Ghana (SSA UOG) have also dared the Chief Executive Officer of the Fair Wages and Salaries Commission (FWSC), Benjamin Arthur to go ahead and withhold their salaries after they declared their strike starting today, Wednesday, July 13.

See also  C/R: Chief Fined For Having Sex With Woman And Her Daughters at Assin Atwereboanna

Announcing the declaration of the strike at a press conference in Accra on Wednesday, July 13, National Chairman of the SSA UOG, Isaac Donkor alleged that the CEO of the FWSC threatened to block their salaries if they go on strike.

The association has been demanding that the government applies fairness in the payment of allowances to public workers in Ghana.

“The CEO of FWSC Ing Ben Arthur has threatened to withhold all salaries of senior staff if we embark on strike. We believe that his posture was intimidating and also an affront to the position he occupies as a public officer who preaches equity but practices none. We are daring him on his claim.

“His action has even triggered our resolve for the strike action. We still maintain our position that the government has been unfair to the senior staff in public universities in Ghana.