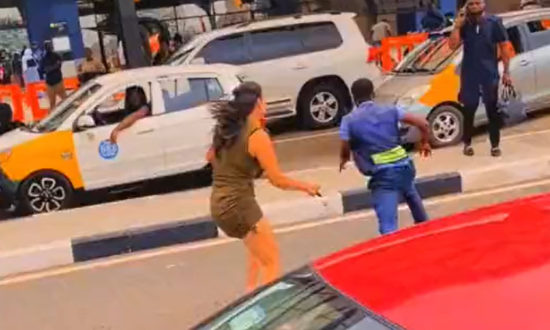 A female foreigner has been arrested for assaulting a car park attendant at the Kotoka International Airport (KIA) on Wednesday.

The suspect is said to have parked on the pedestrian crossing at Terminal 3 departure frontage and when she was asked to move her vehicle she refused.

“In a fit of rage, she got down from the vehicle, removed the clamp and threw it at the Car Park attendant, injuring him in the process,” the Thursday Facebook post read.

GACL further noted that the police personnel deployed at the airport arrested her before handing her over to the Airport Police Station.

The angry woman was also seen throwing a piece of equipment at the man before a police officer intervened.

Many have since been asking what could have incited the female to attack the young attendant.

It is on the back of this that the GACL has come out with an explanation.