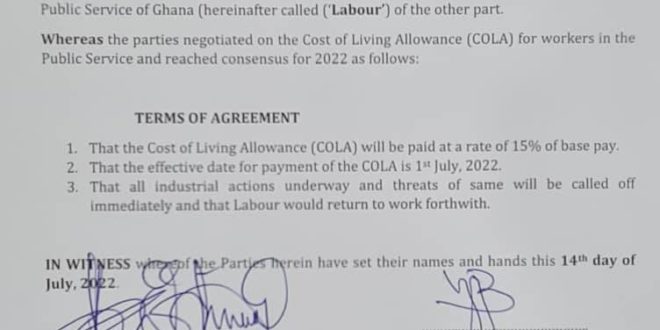 In a statement sighted by MyGhanaMedia.com indicates that  after a back and forth between striking labor unions and government the two parties (the leadership of the labour unions and the Fair Wages and salaries commission ) have now agreed on a 15% Cost of Living Allowance to be paid to all public sector workers instead of the 20% being demanded by the worker unions.

It takes retrospective effect from July 1, 2022.

Earlier  sources said the cause of delay in agreeing on a percentage was intermittent caucus meetings on proposed percentages by government’s side.

With this agreement, all planned industrial actions have been suspended immediately.

“The Cost of Living Allowance (COLA) will be paid at a rate of 15 percent of base pay. That the effective date of the payment of COLA is 1st July 2022, ” Employment and Labour Relations Minister, Ignatius Baffuor Awuah announced to the media after at a crunch meeting held on Thursday, July 14,

This was the third meeting between the government and labour unions since the demand for COLA started.

The delegation from the government side was the Minister for National Security, Albert Kan-Dapaah, Minister for Education, Dr Yaw Adutwum, Minister for Employment and Labour Relations, Ignatius Baffler Awuah and Finance Minister, Ken Ofori Attah together with his Deputy Abena Osei Asare.

A meeting between both parties on Tuesday was adjourned due to the refusal of some labour unions to call off their strike before negotiations commence.

“We have had to adjourn the meeting because both parties; labour and government think that we cannot do this while a party is on strike, so the agreement is that we are going off to talk to each other. They call off the strike and we come again to meet,” Deputy Minister of Employment and Labour Relations, Bright Wereko-Brobbey said.