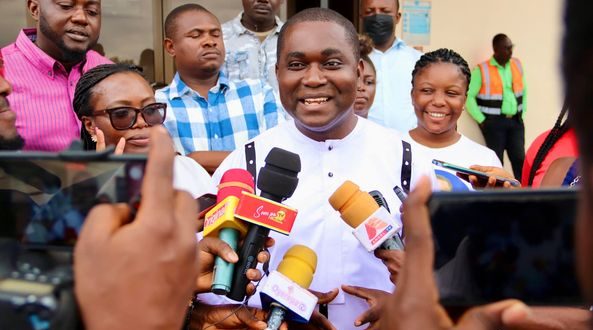 Dr. Charles Dwamena has been elected the new Treasurer of the governing New Patriotic Party (NPP) at the just-ended national delegates conference of the party.

He will replace George Kwabena Abankwah-Yeboah, the incumbent who ran for the General Secretary positon but lost in that race.

Popularly known as Dr. China, Dr. Charles Dwamena, a former Deputy Ghanaian Ambassador to China, polled 2,917 votes to shrug off competition from his three other contenders.

He previously served as Director of Finance and Administration of the party.

Others in that election were Mary Posch-Oduro, Collins Nuntwiri Nuamah and Dr. Yusif Tedem who obtained 1303, 1197 and 125 votes respectively.

In 2018, Dr. China declared intentions to contest the National Treasurer position of the NPP in its national election held in Koforidua.

Several polls had predicted that Dr. China who espoused numerous novel policy ideas, was a veritable threat to then-incumbent treasurer Abankwa Yeboah at the time.

But to the shock of many he withdrew his candidature just a few days after the opening of nominations by the party.

The New Patriotic Party on Saturday and Sunday elected various national leaders to lead the party for the next four years.

The conference was held at the Accra Sports Stadium.