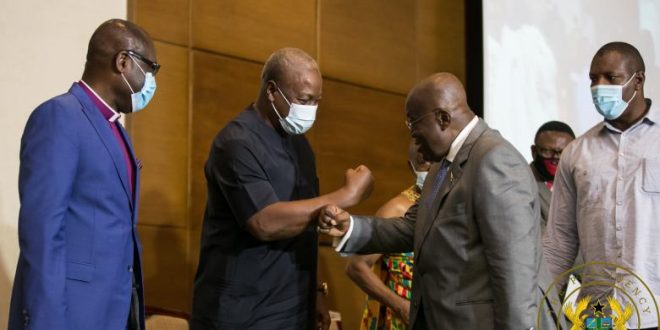 Private Legal Practitioner, Martin Kpebu has criticised President Akufo-Addo for his ‘poor management’ of the economy.

According to him, the President’s poor showing has made former President Mahama look more competent in the eyes of Ghanaians.

Speaking on Newsfile, Saturday, Martin Kpebu noted that the “President’s lack of willpower to fight corruption” and the economic crisis has made John Mahama look like a “saint.”

“We thought John Mahama was the worst, the vampire we had never seen in history and that will be the last…When you talk to people behind the scenes, they find it difficult to back their own words because we had said so much against John Mahama thinking that the ‘Messiah’ Akufo-Addo had arrived,” he said.

He believes that “nothing stops him [President Akufo-Addo] from resigning today.”

According to Mr. Kpebu, Ghanaians must show much public anger against the performance of President Akufo-Addo to boot him out.

“It is public anger that we have to show. Those who are thinking that by coming out to show public anger we are stretching out a hand to John Mahama, do not look at it that way. It is not automatic that if we boot out Akufo-Addo, John Mahama automatically comes in, No. something else could happen,” he noted.

The country is currently facing an economic crisis with the government hoping for International Monetary Fund (IMF) support after meetings with officials from the Fund over the week.

There has been a continuous increase in prices of fuel in the past months forcing transportation fares to go up by 20 percent.

According to the Ghana Statistical Service (GSS), the inflation rate as of June 2022 was 29.8 percent, the highest recorded since December 2003.

The GSS said the rate of inflation was once again driven by Transport (41.6%); Household Equipment and Maintenance (39.6%); Housing, Water, Gas and Electricity (38.4%); Personal Care and Miscellaneous (31.7%); Recreation, Sports and Culture (31.3%) and Food and Non-Alcoholic Beverages (30.7%). These items recorded inflation rates higher than the national average.

I'm Adwenpa-Hene |Blogger & Broadcaster Journalist. I am the CEO and manager of this noble website. I publish on Entertainment, Sports, Politics, Lifestyle, and Technology. You can also follow Us on : YouTube Channel - My Ghana Media TV, Facebook - MyghanaMedia TV , Twitter - @MyGhanamedia2 & Instagram - My Ghana Media TV. Email Address: [email protected] Contact Us: 0200818719
@@MyGhanamedia2
Previous Anwomaso Community Receives Borehole From Hive Blockchain.
Next We Shall Break The 8 – Akufo-Addo