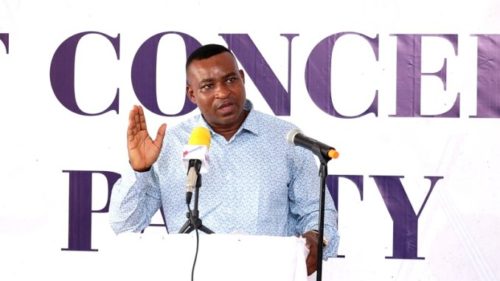 The Ashanti Regional Chairman for the New Patriotic Party, Bernard Antwi Boasiako, popularly known as Chairman Wontumi, has written a letter to Justine Frimpong Kodua, following his election as General Secretary for the NPP.

Lawyer Justin Frimpong Kodua aka (JFK) has won the General Secretary position of the ruling New Patriotic Party with 2,837 votes by beating John Boadu, the Incumbent who had 2,524 votes out of the 5,556 total votes cast with margin of 313 votes.

The race was tough and tight between the two candidates leaving the other contestants in the person of Frederick Opare Ansah, with 50 votes, Iddirus Mush with 104 votes, Ramseyer Ahmed Agyemang Prempeh with 108 votes, and Charles Bissue who had 12 votes even though had stepped down ahead of polls.

John Boadu’s defeat was visibly written in the air before voting commenced at the Accra Sports Stadium on Saturday, 16 July, 2022.

In the letter, Chairman Wontumi stated that:

God knows what is good for our dear party, I supported JB but the delegates in their own wisdom chose you. We look forward to working hard so that together we can ‘Break The 8’ may God bless you and once again CONGRATULATIONS to you and the NPP for a successful elections from Chairman Wontumi to JFK.