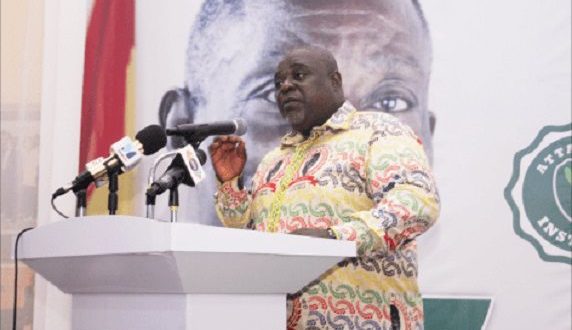 Audio: “Where Is The Autopsy Report Of Atta Mills?” – Anyidoho Dares MP For KEEA

Founder of Atta Mills Institute, Koku Anyidoho has dared the brother of the late former President, John Evans Atta Mills, to produce the autopsy report on the death of his brother.

Koku Anyidoho and the Atta Mills Institute were accused on Tuesday by the Member of Parliament for Komenda Edina Eguafo Abrem (KEEA) Constituency in the Central Region, Samuel Atta Mills for desecrating the grave of the late President in the name of renovation.

Speaking on Newsnite, Tuesday, he said “John Dramani Mahama refused to build Asomdwe Park, he deliberately refused. President of the Republic, Nana Addo Dankwa is building Asomdwe park, is that what is hurting Sammy Atta Mills?”

Mr. Anyidoho alleged that Samuel Atta Mills has not visited the graveside of his brother in the last ten years “to care about the remains of his brother.”

He explained that the renovation at the Asomdwe Park is to “glorify God and Ghana to move away from the level of ignominy that Asomdwe Park sat in. Sammy Atta Mills should be ashamed of himself.”

He contended that the remains of the late President have not been removed.

This Sunday will mark the 10th Anniversary of the death of former President John Evans Atta Mills.

According to Mr. Anyidoho, a memorial thanksgiving service will be held after which President Akufo-Addo will commission the Asomdwe Park.

The non-governmental organisation run by Koku Anyidoho, an aide to the late Prof. Atta Mills, says they are rehabilitating the ‘Asomdwe Park’ where the mortal remains of the ‘Asomdwehene’ were buried.

According to brother of the former President, Samuel Atta Mills, the current arrangement goes against custom.

See also  Kuffuor Did Better Than You, Even That NPP Lost In 2008 – Felix To Akufo-Addo On NPP Winning 2024

Listen to the audio below for more details