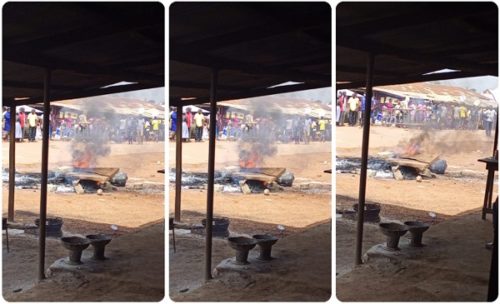 A man alleged to be a member of a suspected syndicate behind robberies in the Juaboso and adjoining districts in the Western North Region has been burnt to ashes in front of a Police station by some angry youth.

Three members of the said syndicate were apprehended by the youth, however, one managed to escape while the police managed to rescue the third suspect before they could lynch him.

The angry youth descended heavily on the Police and threw stones at them and damaged their vehicles when the law enforcers attempted to rescue the suspects.

Eyewitnesses said the suspected robber was exposed after he was seen holding half a dozen mobile phones while trying to board a vehicle at the main Bonsu Nkwanta Lorry Station to Kumasi in the Ashanti Region.

When the alleged robber was confronted by some youth and asked to unlock the phones, he was unable to do so.

The youth then removed a SIM from one of the phones and placed it in a new mobile device and attempted to make a Mobile Money transaction. In the process, the name of a popular member of the community who was recently robbed popped up.

The youth then marched the suspect to the house of the one whose name appeared and upon reaching the house, he narrated the circumstances of how he lost his phone.

Sensing danger, the suspect then confessed to being a member of a robbery syndicate and lead his apprehenders to the house where the remaining members of the gang were.

One member of the gang jumped a wall and escaped while another was apprehended. The two were assaulted by the now irate mob who marched them to the police station.
See also Music is food for the soul, George Krown Set To Release Another Masterpiece Titled “Hope”

On reaching the police station, one of the suspects was set ablaze. The Police then struggled to rescue the another from the mob who are still demanding that the second suspect be released to them for instant justice.

As a result of the increasing numbers of furious youth in front of the Bonsu Nkwanta Police station, the Juaboso Police District Command has called for reinforcement to help contain the situation.

Speaking to the Daily Graphic, the Assembly Member for Bonsu Nkwanta, Mr Bawa Ibrahim said the uncontrolled anger of the youth and their resolve not to listen to reason was a result of the increasing cases of robbery in the area.

He said for some time now it was difficult for a week to pass without a report of a robbery.

“In recent times, one community was robbed and a man killed in front of his wife in one of the communities,” he said.

Other communities he said have had their share of the activities of robbers who have invaded the area making life unbearable for the people.

Mr Ibrahim said people from the district and other adjoining ones travel in fear, which should not be the case.

He also called for immediate action to ensure the security of the people.

As at the time of filing this report, the irate youth are still at the police station waiting for the second person in their custody to be released.

I'm Adwenpa-Hene |Blogger & Broadcaster Journalist. I am the CEO and manager of this noble website. I publish on Entertainment, Sports, Politics, Lifestyle, and Technology. You can also follow Us on : YouTube Channel - My Ghana Media TV, Facebook - MyghanaMedia TV , Twitter - @MyGhanamedia2 & Instagram - My Ghana Media TV. Email Address: [email protected] Contact Us: 0200818719
@@MyGhanamedia2
Previous Volta Region: Police Open Fire On Aboboyaa Rider Amid Confusion Over GH¢1 levy
Next Coach Dr. Prosper Ogum Has “NOT” Resigned, Nor Communicated His Resignation To The Board – Asante kotoko Mgt