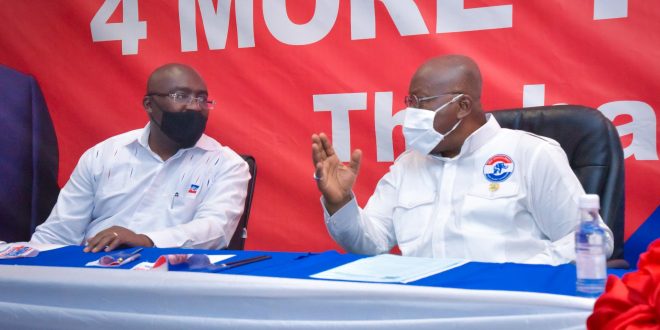 A private legal practitioner has asked Ghana’s President Akufo-Addo and his Vice, Dr Mahamudu Bawumia to resign from their positions for their failure to fight corruption

According to Martin Kpebu, the President while in opposition rode on an anti-corruption campaign to win the 2016 general elections.

Thus, if he has failed to curb the menace, he and his government should step down for a more competent individual to deal with the canker.

“[President] Akufo-Addo promised to make corruption unattractive and here is the case he is not doing anything about it. We want to try somebody else because he has shown, he is not able to and [Vice President] Bawumia has also shown he is not able to.

“The President can voluntarily go and that will be the best,” he told host of Newsfile, Samson Lardy Anyenini on Saturday.

Citing events from 1969, Mr Kpebu recounted how Head of State, Lieutenant General Joseph Arthur Ankrah resigned over a bribery allegation of about $20,000.

He indicated that President Akufo-Addo and Dr Bawumia can emulate the action of the former Head of State as far as bribery and corruption are concerned.

In his view, posterity will forgive all their shortcomings if they voluntarily resign.

“If [President] Akufo-Addo and Dr Bawumia step down today, they will get the best applause and history will forgive them for all the rots they have superintended.

“And Ghanaians will get a new opportunity to try someone else to deal with corruption,” he opined.

Mr Kpebu call for the President and his Vice’s resignation stems from a latest survey that unearths the extent of corruption in the country.

The survey by the Ghana Statistical Service (GSS) indicated that a total of ¢5 billion had been paid in bribes last year to access basic services in both the private and public sectors.

Dubbed ‘2021 Ghana Integrity of Public Services Survey’ indicates that 26.7% public sector officials were engaged in bribery acts, whilst 9.1% were officials from the private sector.

Prevalence of bribery in Ghana

The survey revealed that, on average, there is no difference in the prevalence of bribery in rural and urban areas of Ghana. There are, however, sizable variations across the 16 regions of the country.

On regional basis, the prevalence of bribery in the Bono East, Savannah and Volta regions, for example, were substantially lower than the national rate. The three regions recorded corruption cases of 11.8%, 14.5% and 19.1% respectively.

In the Western North, Ahafo and North East regions, the corrupt cases reported were substantially higher, at 53.4%, 47.0% and 41.9% respectively.